LAS VEGAS — It was the 88th minute of the World Cup final this past July, with Germany and Argentina locked in a scoreless draw. Time was running out, and Joachim Low, Germany’s head coach, decided to insert midfielder Mario Gotze in the game to provide his team with a last-minute spark.

Low ended up looking like a genius afterward, as it was Gotze who became the only substitute in history to score a World Cup-winning goal with his 113th-minute beauty that helped Germany win its fourth World Cup trophy.

But what you may not know is why Low picked Gotze over his other options on the bench — and how wearable technology played a role in the decision.

Darcy Norman, a performance data analyst with the German national team, spoke today at the Consumer Electronics Show and described how he’s helped the squad improve its decision-making with Adidas’ micoach wearable technology and software.

Leading up to last year’s World Cup, the German team wore small devices during practice to monitor everything from speed, distance, and heart rate of each player. Norman and his colleagues would crunch the data after training sessions and see how exactly each athlete performed. Coaches then used the information to plan future workouts more effectively and make better personnel decisions.

“We quantify the training sessions to get some benchmark to then have meaningful conversations,” said Norman, who also works with EXOS.

For example, you can see below a report from one training session that breaks data down into each type of drill, and shows intensity levels based on what the wearable devices tracked: 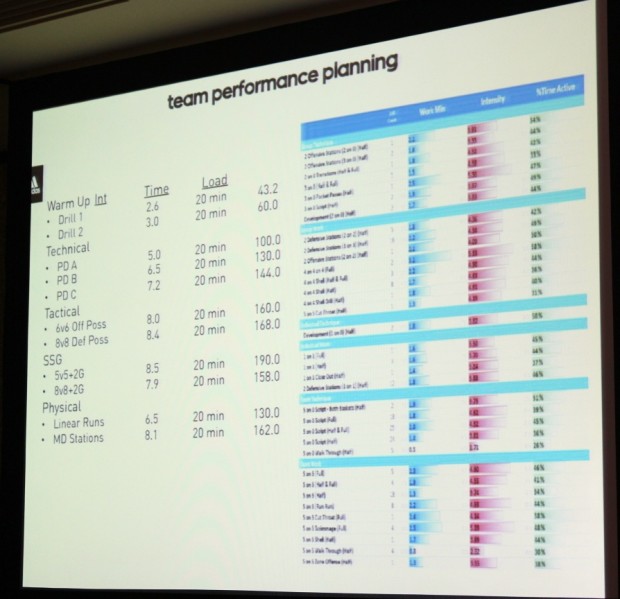 This one shows “training load” with each player’s heart rate for a given time period. “Training load” is a combination of heart-rate exertion and mechanical load (running). Based on the data, coaches may decide to ease off on practice the next day, for example. 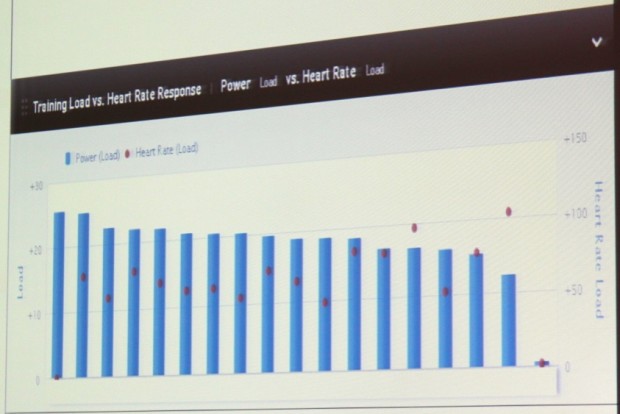 There are also player interval reports from each practice. The graph below shows two players enclosed in the green rectangle — both were sitting on the bench during that World Cup final. 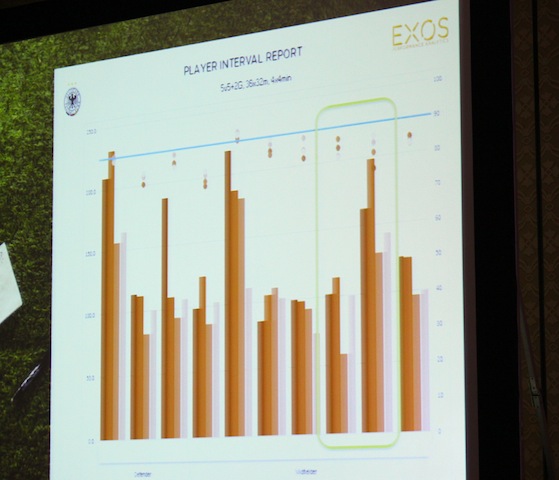 Gotze’s data is on the right and shows how he was more effective on the field during a 5-on-5 practice session when analyzing variables like speed and distance. Norman said that the data was part of why Low picked Gotze to enter the World Cup final and up the tempo.

Of course, coaches must take a host of factors into consideration when deciding which players to use — many of which can’t be measured by a tracking device. But as the German national team showed last year — along with other squads like the Seattle Sounders — using new technology is certainly giving teams a leg up and helping them win.

“There’s obviously hard work, passion, tears, sweat, and a few choice words between each game — it’s not all about technology,” said Simon Drabble, a director of product creation with Adidas who also spoke on Wednesday. “But there’s no denying the fact that we have a great example of how technology helped train the best of the best to be number one in the world.”