With most sports, a healthy body is essential to success. That’s certainly true in soccer, where players run around the pitch for nearly 10 miles per match and make a series of sprints that require tip-top physical health.

To help ensure that its players are performing to the best of their ability, the Seattle Sounders FC uses a unique combination of data and wearable technology that allows the team to do everything from track movement and monitor sleep patterns.

David Tenney is the squad’s Sport Science and Performance Manager and has helped implement much of the new technology used by the Sounders.

“We are looking to answer the questions of how to utilize technology to predict and prevent injuries, and optimize training strategies,” Tenney said.

During practice, the players strap on a wearable harness from Catapult Sports that is used to track precisely how fast and for how long an athlete is moving around on the field. That information is valuable for a variety of reasons — for example, the data can help the team determine which right exercises will help an injured player recover most effectively.

All that data is then crunched using tools from Seattle-based Tableau Software. The results, which are analyzed by coaches and trainers, look something like this. (Click for larger images.) 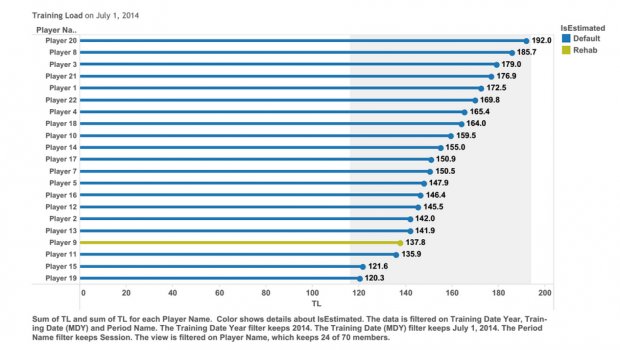 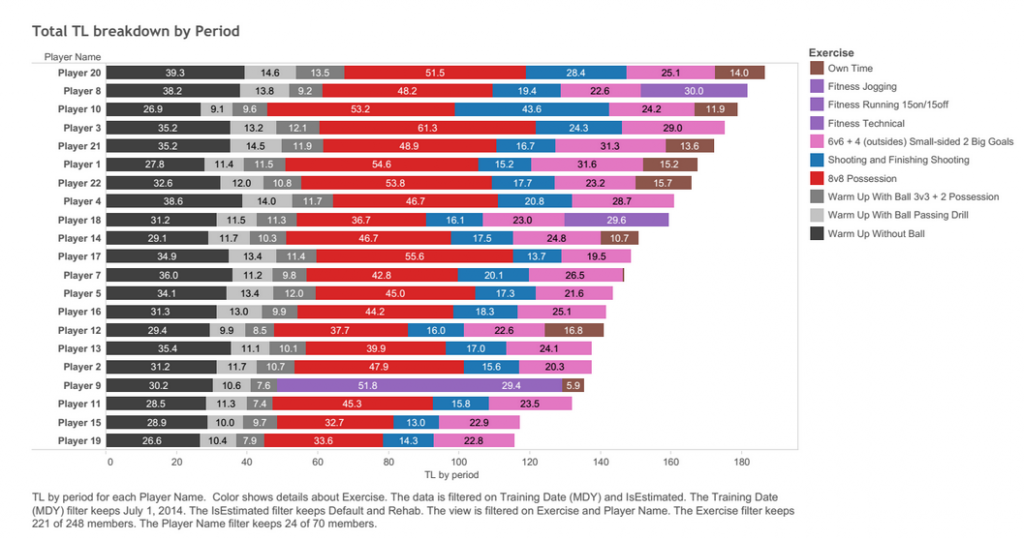 The graphs shows how each player was moving around during one practice and how hard they were working, depending on a specific exercise. Training load is a combination of heart-rate exertion and mechanical load (running). Based on the data, coaches may decide to ease off on practice the next day, for example.

But this is just one snippet. The team uses a massive amount of information and graphs like this to determine how its players are performing from a physical standpoint, and what can be done to improve that.

“In this way we can continue to provide predictive data to our coaching staffs that may provide insight into the performance our athletes are capable of, based on their responses to match play, travel, and training regimes,” Tenney said.

It’s tough to tell exactly how all this data is helping the team succeed on the field, though the Sounders have posted a winning record every season since 2009. And this year, as the club analyzes more player data than ever, the Sounders are far-and-away the top team in the MLS so far with 11 wins in 16 matches.

The squad is also performing at a high level at a time when most players lose energy, having scored more than a third of its goals in the last 15 minutes of each match.

“While the use of technology is increasing in MLS, I am pretty confident that we are ahead of the game relative to what the rest of the league is doing,” Tenney noted.

The results speak for themselves.