Hardware and software innovation was front and center at the GeekWire Summit on Thursday afternoon.

It was so fun hearing four Pacific Northwest-based entrepreneurs describe their products on stage during the “Inventions We Love” segment at the Summit in Seattle.

Ultimately, it was You Kick Ass co-founder Keri Andrews who won the audience favorite and took home a prize from Best Buy for her company’s technology that turns a simple picture of anyone into a superhero action figure.

Here’s a quick rundown of each invention.

So many people struggle to find time to work out and Excy wants to help with its portable exercise system.

Created by PR and digital marketing veteran Michele Mehl, Excy is gearing up to launch a Kickstarter for its all-in-one recumbent bike, upper body ergometer, spin trainer, and more.

“What we’ve discovered while talking to a lot of people during this whole process is that people don’t feel like they have the time and place to exercise,” Mehl said today. “Excy is literally available to you at the exact time and place you have available to work out, wherever you are.”

The portable device, which easily attaches to a chair, also pairs with a mobile app that acts as a fitness tracker and virtual coach. It will cost $599 when Excy goes live with its Kickstarter later this year. 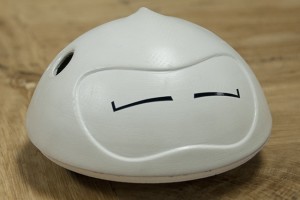 Mano is the creator of Wigl, a toy that helps expose children to computer programming skills through music. The robot can move in different directions and light up depending on what musical notes a user plays. For example, when someone plays an “A” note on a recorder, the robot might move forward. When “B” is played, it may move backward. A “C,” or “D,” note could turn Wigl left and right.

The Wigl also allows kids to design their own “Wigl dance moves,” and there are also ways to pair the robot with a maze or series of maps.

“It was something I was interested in as a new and unique way that kids can interact with technology outside of a smartphone or tablet,” Mano said.

Mano plans on selling Wigl as an open source kit that people can use to build their own musically-interactive device.

PebbleBee is helping you keep track of your belongings and perform smartphone commands without an actual smartphone.

Founded by two ex-Boeing engineers, PebbleBee’s first product was Honey, a bluetooth-enabled device that affixes to various personal items, notifying users if they happen to wander outside a specified range and assisting in the location of the lost items. The company raised more than $200,000 from more than 3,000 backers on Kickstarter last year for the Honey.

Then, this summer, PebbleBee launched another crowdfunding campaign for The Stone, a small device that measures 10mm thick and uses IFTTT (If This, Then That) logic to create shortcuts for various activities you normally need your phone for. Stone lets you do anything from turning on music to taking selfies.

PebbleBee CEO Daniel Daoura showed off each product on stage today at the GeekWire Summit.

“We are product company that helps people save time,” Daoura said.

Andrews is the co-founder of You Kick Ass, a startup that takes photos of people and produces a 3D replica of one’s head put on an action figure of their choice.

“We make action figures to look like you,” Andrews said today.

The company, which won the audience favorite award for the “Inventions We Love” segment on Thursday at the GeekWire Summit, raised $45,000 in a successful Kickstarter campaign last year and later appeared on the ABC show Shark Tank, where they landed an investment from Mark Cuban.

While presenting on stage today, Andrews presented GeekWire co-founders Todd Bishop and John Cook with their very own action figures. Bishop proceeded to smash the head off of Cook’s superhero within seconds. 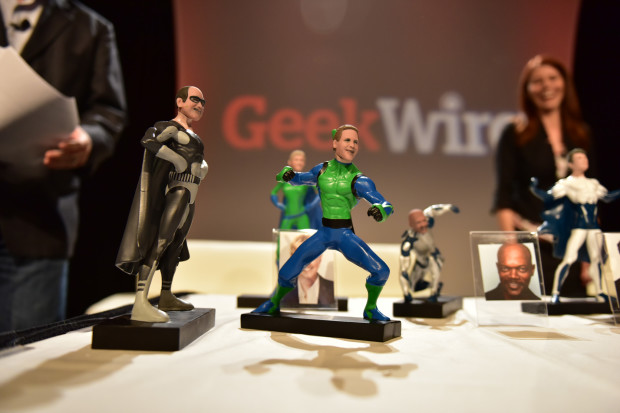 Here’s a look at all four of the presenters from the first day of the GeekWire Summit:

And here’s a recap of the final four inventions from day two.