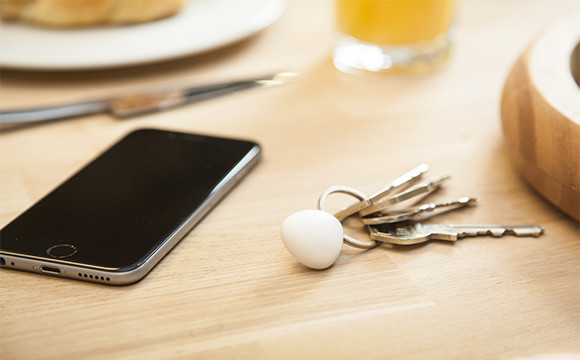 The Seattle startup has raised more than $55,000 — nearly 200 percent of its funding goal — on Indiegogo for Stone, a device that not only tracks items but can also control smartphone apps from afar.

“While both the Honey and the Stone track, the Honey is a better finder such as finding keys when they are somewhere around the house with its internal buzzer and LED,” he explained. “In contrast, the Stone is a better tracker and alleviates you from constantly needing your phone nearby or handy to get common or necessary things done.”

The Stone, a small device that measures 10mm thick, uses IFTTT (If This, Then That) logic to create shortcuts for various activities you normally need your phone for. After an initial set-up, you can press Stone’s button to do anything from turning on music to taking selfies.

“Other scenarios this comes in handy is when your phone is not discrete or safe enough to use,” noted Daoura. “Whether it is an awkward dinner you want to get rescued from or you are driving and can’t use your phone, or you are in a dangerous situation and don’t have the time to pull out your phone, reach into your pocket and subtly press the Stone’s button to perform the pre-loaded action you have determined you need at that time.”

PebbleBee has already sold nearly 100,000 Honey units, which are available at Target stores. The company, which started in a basement and now employs 18, has raised $300,000 to date, a majority of which came from crowdfunding campaigns.

Pebblebee, a hardware company making customized Bluetooth trackers and sensors, is using ASK to enable customers to track items and check sensors using voice. “We’ve learned over the past few years that it’s not always intuitive to use a visual app with so many features. Using voice commands simplifies the complexity for customers,” said Daniel Daoura, Co-Founder and CEO of Pebblebee. “We’re thrilled to use the Alexa Skills Kit to integrate Alexa with Pebblebee’s sensor information, so a customer can simply ask, ‘Alexa, find my keys,’ or ‘Alexa, how warm is the baby’s room?’ or ‘Alexa, is my dog nearby?’”

Check out the funny video to learn more about Stone: