Trending: Google location data for Seattle shows decline in work, transit and retail trips — but not park visits
Sponsored by

That’s why the Portland-based sales manager-turned-entrepreneur created Wigl, an interactive educational robot that teaches children both how to play musical instruments and the basics of computer programming.

For younger kids in the 5-to-6-year-old age range, Wigl is aimed at teaching basic music skills. The robot can move in different directions and light up depending on what musical notes a child plays.

For example, when someone plays an “A” note on a recorder, the robot might move forward. When “B” is played, it may move backward. A “C,” or “D,” note could turn Wigl left and right. 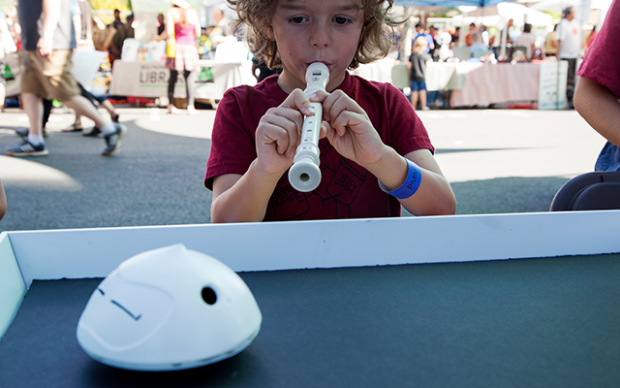 “Children in this age range don’t hear notes the same way adults do,” Mano explained. “When they play an off key, we can tell, but kids don’t necessarily know. If the note played is just a little off, the robot won’t react in a specific way until a child plays a clean solid note.”

If those notes are played in the correct order for a particular tune, the robot does a little jiggle — or, in this case, a “Wigl.”

“It’s really like their music buddy to practice and train with, and to motivate them to keep going,” Mano said. “It’s socially isolating to practice. To have someone interact with you and celebrate your wins — it’s fun.”

But Mano said that “we get to have some fun” when kids aged 7-to-9 years old start using Wigl. That’s because they can learn how to program the robot through notes to move certain ways, and also program their own Wigl dance moves. There are also ways to pair the robot with a maze or series of maps.

“This ties into using musical notes as pieces of psuedo code for kids,” Mano said.

Mano believes that Wigl can not only teach kids how to play instruments, but also help them understand the basics and fundamentals of programming. If a child can figure out how to implement a step-by-step method to move the robot with individual music notes, Mano said, they’re already learning the process of coding at an early age.

“This is a unique and fun way to get kids into that frame of mind of taking a big problem and breaking it into smaller chunks,” he added.

There are products out there doing something similar, most notably the Dash & Dot robots from a company called Wonder Workshop that’s backed by Google Ventures. But Mano said Wigl is different because it does not need an accompanying device to work properly — just a musical instrument. He’s a big proponent of letting children explore their own creativity without a screen, and Wigl is designed to specifically achieve that goal.

“I feel like there’s a gap missing where kids still need to play with toys not involved with a computer,” Mano noted. “We’re going after physical and experimental learning in more creative ways.”

Mano, who just quit his full-time job to focus on Wigl, narrowly missed his $10,000 funding goal on Indiegogo earlier this month. But he called it a blessing in disguise because the crowdfunding campaign brought upon serious institutional interest from within the education space.

Mano is now partnering with a few schools in the Portland area early next year to focus on the educational benefits of Wigl, and plans to raise some investment money before offering the product to the public again. The Indiegogo campaign also helped Mano identify potential niche markets for Wigl, including kids with hearing or learning disabilities.

Check out how Wigl works below: