Football helmets, 3D laser printers, a high-tech safety system for construction workers, and a device that makes chlorine for clean drinking water — these were some of the awesome innovations that entrepreneurs showed off at the GeekWire Summit.

Our second “Inventions We Love” segment of the Summit this past Friday included on-stage demos from Glowforge, Vicis, Illumagear, and Cascade Designs, which ultimately took home the audience favorite for its device that creates chlorine with water, salt and electricity to produce safe drinking water.

A day earlier, we saw four other inventions, and you can see those here.

Here’s a recap of each presentation from Friday — you can also watch video of the demos at the bottom of this post.

Glowforge is taking the idea of “homemade” to another level.

The new Seattle startup that just began selling its 3D laser printer earlier this month. The device, also called the Glowforge, lets people use raw materials like leather, paper, plastic, fabric, or cardboard and make products with a push of a button. It has no screens and measures 37 inches wide, 20 inches deep, and eight inches tall.

The device itself is different from most other 3D printers because instead of making objects out of plastic strands, Glowforge uses a laser to quickly cut and engrave products. Along with smartphone sensors built into the printer, the lasers allow the Wi-Fi-connected device to cut and engrave materials that are curved, uneven, or irregular. Glowforge’s dual cameras also measure the thickness of material to a precision of four one thousandths of an inch.

“This is like a little robot with a lightsaber,” Glowforge CEO Dan Shapiro said on stage.

You can create “almost anything” with Glowforge, including jewelry, light fixtures, smartphone engravings, wallets, and toys. Shapiro showed off a book bag he made that had the exact dimensions for his laptop and other personal items — all for $58 and six hours of work.

“It’s like we’ve been eating fast food for years and never had kitchens, never been able to make food for ourselves the way we want it,” he said on Friday. “I like to think about this as reinventing what it means for something to be homemade — something better, faster, and cheaper than what you’ll buy in a store.”

Initial sales for the Glowforge have been impressive, with the company making $1 million in 24 hours — that number reached $5 million within one week.

Sports-related concussions are a serious public health problem and one Seattle startup wants to help.

Vicis has developed a high-tech football helmet that is designed to mitigate the forces that are thought to cause concussions on the football field and in other contact sports.

The company, which spun out of the University of Washington last year, has spent the last two years doing extensive research and development, working with NFL and collegiate players to help build a product that provides more protection than the traditional helmet.

Vicis brought out former University of Washington and NFL quarterback Damon Huard on stage at the Summit to help demonstrate how the Vicis helmet is different from what players use today. GeekWire co-founders John Cook and Todd Bishop strapped on a Vicis helmet and a normal helmet, respectively, as Huard lightly tapped each with a hammer.

“You’re going to give me one without your technology in it?” a worried Bishop asked.

Huard’s taps elicited a different noise for the helmets — the sound from Vicis’ helmet was much more subdued.

“They sound different because they are designed differently,” Vicis CEO Dave Marver said on stage. “We don’t have that hard polycarbonate shell. We have a multi-layered system with a novel outer shell material and a novel engineered structure. We’ve redesigned the helmet from scratch to provide protection against not just skull fracture, but from traumatic brain injury or concussion.”

Vicis has raised more than $5 million to date and has an impressive leadership team. Marver has over two decades of business experience in the medical device space; Chief Medical Officer Samuel Browd is a director for the Seattle Children’s Hospital Sports Concussion Program; and Chief Technology Officer Per Reinhall is the chairman of the UW Mechanical Engineering Department.

Vicis plans to have teams start wearing its helmet early next year.

Every eight hours, a U.S. construction worker dies on the job. This is a statistic Illumagear wants to fix with its innovative safety system. 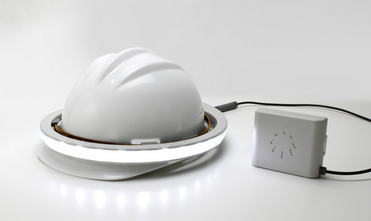 Illumagear is the maker of the Halo Light, a patented 360-degree personal safety system that attaches easily to any standard hard hat and illuminates workers as they go about their jobs at construction sites.

Andrew Royal, president and chief product officer at Illumagear, said that construction workers are equipped with a vest and have access to an aerial light, while some purchase a camping light from a store like REI to help see in the dark.

For him, that isn’t enough.

“We thought we could build a better product,” he said on Friday.

The Halo Light affixes securely to a hard hat and easily pulls off. It has three lighting modes, depending on what type of work is being done, and is also “very durable,” Royal said.

“It’s a tool,” he added. “It’s not just something that will break.”

The company, which raised $1.25 million last year, counts 14 of the 30 largest U.S. construction companies as customers, in addition to 20 of the 50 state department of transportation offices. Backers include Peter Küttel and Rodger May of MK Ventures, as well as former Microsoft exec J Allard.

A public/private partnership between two Seattle organizations is getting cleaner drinking water to people in developing countries.

“This technology is what happens when a world class global health organization and a 40-year-old outdoor company set out to solve a problem,” said Laura McLaughlin, director of MSR Global Health, a new division of the outdoor gear maker.

The SE200 uses salt, water and power (as little as a 12-volt battery) to produce a chlorine concentrate that can treat water at wells, kiosks, water trucks, schools and other sources of water in a community. It’s operated by pushing a single button, minimizing the chances for mistakes.

“This tiny device can fulfill the need for safe drinking water every day for hundreds of people in developing countries,” said Glenn Austin, senior technical officer at PATH.

The chlorine maker just launched a few months ago and MSR/Path have shipped 200 units thus far. The organizations are also teaming up to develop a larger “electrochlorinator” that uses similar technology but is designed to meet a larger demand, like at refugee camps, for example.

Also involved in the project are the Washington Global Health Alliance, the Life Sciences Discovery Fund, and the Christian humanitarian organization WorldVision, which will be introducing the new device in communities in East and West Africa.