Those who take taxis in San Francisco should expect to see more Flywheel branding.

Flywheel, which develops a hailing app for taxi drivers, today announced that it has partnered with San Francisco’s oldest taxi company for “FlywheelTaxi.”

Desoto Cab, which has used Flywheel’s technology for more than two years, is rebranding its fleet of more than 300 taxis with the FlywheelTaxi logo.

Flywheel also announced today that it reached an agreement with San Francisco International Airport to legally pick up and drop off those that use its app. SFO officials approved the same for uberX, Lyft and Sidecar late last year. The airport also approved Curb’s taxi hailing-app in October.

Flywheel CEO Rakesh Mathur, who took over in November 2014 when the company raised a $12 million Series C round, called FlyWheelTaxi an “incredible opportunity to very visibly show people our growth and commitment to customer satisfaction.”

“Flywheel is taking taxis into the modern era allowing them to compete with — and beat the unlicensed taxi segment,” Mathur said in a statement.

Flywheel is like Uber and Lyft in that it builds software that helps drivers and passengers connect with GPS tracking and mobile payment processing. However, the company partners with both taxi fleets and drivers who pay Flywheel 10 percent of every fare booked with its app, in addition to a $1 service fee from the passenger. 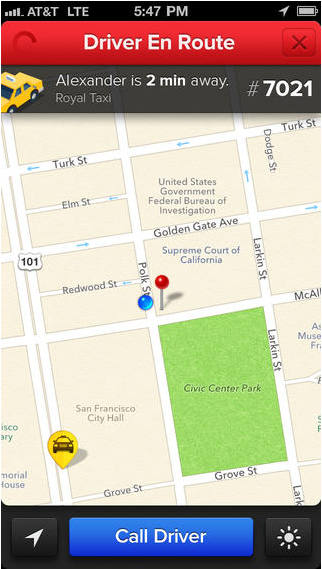 Flywheel says its technology is now in 85 percent of San Francisco taxis. Uber, meanwhile, has declared a war against the taxi industry, although it does have partnerships with for-hire companies in Seattle.

Flywheel is now operating in five U.S. cities: San Francisco, Los Angeles, Seattle, San Diego and Sacramento. In an interview with Mathur this past November, the CEO told GeekWire he wants Flywheel to “dominate all major markets in the U.S.”

Mathur also noted that Flywheel has the potential to scale bigger than Uber, which is operating in more than 250 cities worldwide and has raised $4 billion. He said that “there are simply a lot more people taking a taxi.”

“There are 120 million taxi rides per month,” Mathur said. “In terms of revenue, that’s a significantly larger scale than Uber.”