Flywheel has a new executive team, a fresh round of funding, and serious ambitions to scale bigger than competitors like Uber.

“I totally believe that the taxi industry is here to stay,” Mathur told GeekWire. “It just doesn’t have a unifying app that can provide street hailing of the type that Uber has perfected.”

Flywheel is like Uber and Lyft in many ways. It builds software that helps drivers and passengers connect in an efficient manner, with GPS tracking and mobile payment processing. It makes money on each ride from drivers in exchange for an app that it says helps increase their business.

But Flywheel, or rather the taxi industry in general, was late to the hail-by-smartphone party. Uber and Lyft launched in 2007 and 2009, respectively, and quickly gained incredible momentum and financial backing — a combined $1.8 billion to date — with a transportation service that took advantage of smartphone technology and the personal vehicles of drivers.

Many traditional taxi companies and drivers have seen their profits dip as a result of companies like Uber. Most don’t use a mobile app that has the same functionality and ease of use that its new competitors offer.

That’s where Flywheel comes in. The company partners with both taxi fleets and drivers who pay Flywheel 10 percent of every fare booked with its app, in addition to a $1 service fee from the passenger.

Flywheel says its technology is now in 80 percent of San Francisco taxis, while the company is also operating in Seattle and Los Angeles.

But the goal is much more ambitious than three cities, as Mathur said he wants Flywheel to “dominate all major markets in the U.S.” He also noted that others developing apps for taxis aren’t as focused on the consumer as his company.

“Our differentiation is who we serve and the quality of our technology,” Mathur said.

Of course, beating out other taxi-hailing apps is only half the battle. Some believe that fast-growing, venture-backed companies like Uber will drive taxi fleets out of the market. In fact, Uber CEO Travis Kalanick said earlier this year that his company is in a political campaign against an “asshole opponent named ‘Taxi.’” 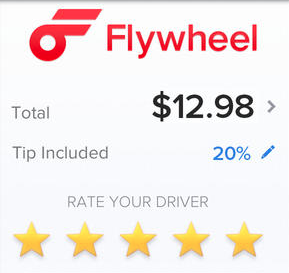 Mathur, however, said that there is no evidence of people hailing fewer taxis.

“I think the taxi industry is terribly characterized by Travis with very objectionable language,” Marthur said of Uber’s boss.

Mathur added that Flywheel has the potential to scale bigger than Uber, which is operating in more than 170 cities worldwide and has raised $1.5 billion. He said that “there are simply a lot more people taking a taxi.”

“There are 120 million taxi rides per month,” Mathur said. “In terms of revenue, that’s a significantly larger scale than Uber.”

However, Mathur did give credit to Uber for doing a “huge favor.”

“They’ve shown what a high-quality, consumer-facing app can do in terms of aggregating demand,” he explained. “We’re very fortunate that the taxi industry sees this need.”

Another favor from Uber comes in the form of bad PR that the company has generated over the past week, with executives threatening to dig up dirt on critical journalists and other employees tracking private travel records. It’s resulted in some people vowing to never use Uber again, potentially opening the door for competitors like Lyft and Flywheel.

Mathur touted the advantages of taking a taxi versus an Uber, including more strict background checks for drivers, no surge pricing, and city knowledge.

“I can’t tell you how many occasions I’ve had to use my phone to give directions to the ride-share guys,” Mathur said.

Flywheel will use the fresh funding, which comes from TCW/Craton, Rockport Capital and Shasta Ventures, to expand to more cities and explore more partnerships like the pilot delivery program it is testing with Amazon.

“We see huge potential in taxis serving as logistics backbones for cities when it comes to same-day delivery,” Mathur noted.

Joining Mathur is new CFO Oneal Bhambani, a partner at TCW/Craton, and new CTO Percy Rajani, a veteran entrepreneur who previously was CTO at Humin.