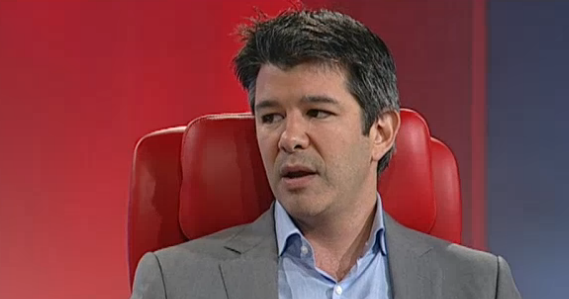 Uber CEO Travis Kalanick is not shy about his intentions to upend the taxi industry.

Speaking today at the Re/code Code Conference, Kalanick said that his company is in a political campaign against an “asshole” opponent named “Taxi.”

Kalanick: This is a political campaign. "The challenger is Uber & the incumbent is an asshole named Taxi." #codecon

Kalanick added that Uber, reportedly now valued at $17 billion, is raising a new round that could be “record-breaking.” The company is also seeking experienced political consultants in its battle with the taxi industry.

Kalanick: Uber is "talking to the folks who have run campaigns for presidential candidates." #codecon

Many taxi drivers have long opposed Uber, which has disrupted the incumbents with smartphone technology. One association in Washington sued the company in March for “an unlawful and deceptive business practice which harms the economic interests of taxicab drivers.” Meanwhile, some cities have kept Uber off its roads due to safety concerns, while taxi drivers around the country are protesting the company and asking local governments for more regulation.

There’s also Uber drivers who are angry with Uber itself, with some in Seattle forming a new association earlier this month. Members say they’re fed up with the way Uber removes drivers from its system, and are concerned about sufficient liability coverage to protect drivers and riders.

But Uber does not seem to be slowing down anytime soon. Here are some of his comments, which you can view in the video below:

So this guy named taxi is throwing mud at us. Nobody likes him. He’s not a very nice character, people don’t like what he does, but he’s so woven into the political fabric and machinery that lots of people owe him favors and he keeps paying so the political machinery likes him.

If you don’t know you’re in that political campaign, then the mud is on you and you start looking dirty. So what we have to do in realizing that we’re in this campaign, is we have to start fighting in that campaign. We have to bring out the truth about how dark and how dangerous and evil the taxi side of things is.

Kalanick also talked briefly about driverless cars, saying that one day he would love to have all Uber vehicles driving themselves.

But, he later reminded his Twitter followers that this is a long-term idea.

Drivers on @uber_nyc making $90k/yr Driverless car is a multi-decade transition. Let's take a breath and I'll see you in the year 2035

Kalanick also announced today a new partnership with AT&T, which will embed the Uber app on new AT&T Android smartphones. Uber, which is bringing on 20,000 new drivers every month, will also moving its drivers to AT&T’s network this summer.