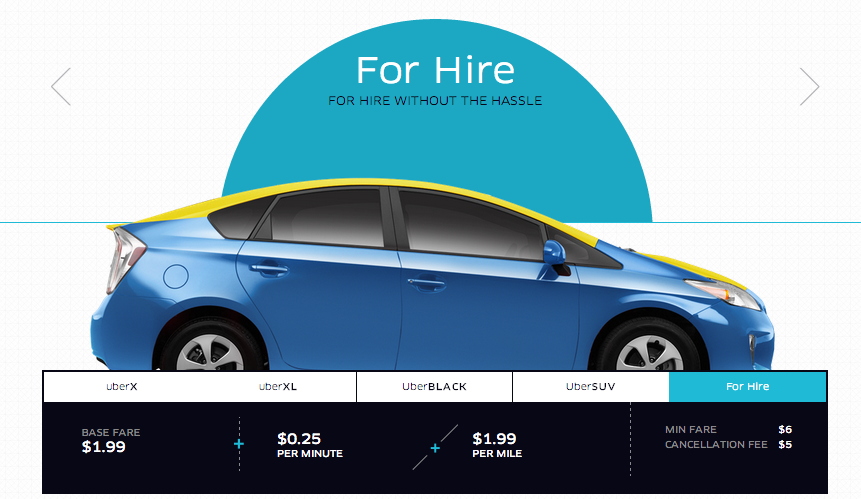 Just a few months ago, it would have been hard to fathom a business partnership between Uber and Seattle’s for-hire taxi companies. 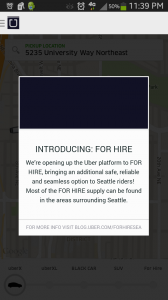 Uber on Friday began offering a new option for riders in Seattle called “For Hire,” a low-cost option with rates comparable to UberX, Uber’s cheaper service that lets random people use their cars to transport passengers.

Uber Seattle General Manager Brooke Steger said that her company has teamed up with CNG For Hire, Eastside For Hire, and a “handful” of other single operators.

Seattle’s for-hire vehicles are similar to taxis, but charge a fixed fee for each ride — they don’t use meters — and differentiate themselves from cabs with varying color schemes.

However, the for-hire vehicles available in the Uber app charge by the mile ($1.99 per) and minute ($0.25 per) — just like Uber’s other offerings. It’s unclear whether the for-hire companies needed approval from the City to offer a meter price, and we’ve reached out to officials for comment.

Here’s how the pricing compares to other Uber options:

As Uber outlines in this blog post, for-hire rides will also include a default 20 percent tip — Uber’s other services do not allow for tipping. Uber said customers can adjust the 20 percent tip by going to the payment tab on their profile pages:

With the new for-hire partnerships, it looks like Uber is trying to expand its pick-up zones outside of Seattle city limits:

@kristy Correct! Pricing is in the blog. :) Most supply is outside of Seattle city limits helping expand our pick up zone! :)

There are about 200 for-hire licenses in Seattle, so Uber customers shouldn’t expect UberX-like availability with the for-hire cars. On Friday evening, I didn’t notice many for-hire drivers available around downtown Seattle on the Uber app, while there were flocks of UberX and UberBlack vehicles all around town. I just checked the app again on Saturday morning and it was the same.

“Most of the For Hire supply can be found in the areas surrounding the Seattle city limits,” Uber noted in the blog post.

Back in July when the Seattle City Council approved new regulations for Uber, Lyft, and Sidecar — also known as transportation network companies (TNC) — it also gave more rights to for-hire companies, including the ability to hail rides from passengers on the street. Previously, only taxis were allowed to pick up riders who flagged them on the street, and for-hire companies were restricted to pre-arranged trips.

Uber and the other TNCs are not allowed to pick up street hails. But now that the for-hire vehicles are on Uber’s app, it seems as though a for-hire driver could hypothetically pick up a customer on the street — legally — and then have them use Uber’s app to complete payment.

Another implication of this partnership are Uber customers looking for affordable rides from Seattle-Tacoma International Airport. The Port of Seattle does not allow UberX drivers to pick up passengers from Sea-Tac — however, some for-hire vehicles can if they have proper licensing.

Though Uber and the for-hire companies traded barbs in numerous City Council meetings over the past 18 months, the new partnerships don’t come as a huge surprise. In July, shortly after the City Council passed the TNC regulations, the King County For Hire Association teamed up with Uber to put on an event that “recognized the driver community in Seattle, its diversity and the outstanding level of service and safety they provide to Seattle residents and visitors.”

“We are coming together and putting all the fighting behind us,” Eastside For Hire General Manager Sam Guled told us in July. “We are moving forward.”

Uber has partnered with taxi drivers in other cities with its UberTaxi option. For example, in New York City, customers can use Uber to hail a taxi, but must pay their driver with cash.

We’ve reached out to Guled and the City of Seattle for more details on the new partnerships, and we’ll update this story when we hear back.