A former NFL running back is trying to create the Facebook for health and wellness.

Robert Smith, a two-time Pro Bowler who played eight seasons for the Minnesota Vikings, is the founder of Fan Health Network (FHN), a new app that features athletes and famous sports personalities who share wellness advice and encouragement.

FHN is also a social platform, allowing users to post their fitness tracker data and compete for prizes. In addition, the app provides workout curriculum that include videos and articles. 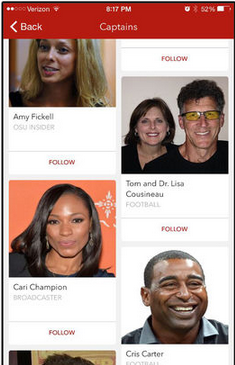 “There’s a lot of noise on Facebook and Twitter, whether it’s the color of dresses or llamas — a lot of distractions,” Smith told GeekWire. “Health deserved its own space.”

Former athletes like Cris Carter and Marcellus Wiley are already on the app, along with sports broadcasters like John Buccigross and Cari Champion. They are paid to interact with the app and post wellness-related content. The idea is to use fans’ passion for their favorite teams, universities, and athletes to enable healthier lifestyles and activities.

For example, FHN just launched a contest called the Fan Health Challenge, which asks users to demonstrate a healthy lifestyle for six weeks by posting their healthy meals, workouts, fitness tracker data, and before/after pictures. The winner will take home $25,000 and two tickets to the ESPYS award show in July.

Smith, who now regularly appears on ESPN as an analyst, teamed up with Seattle-based Taqtile to help develop the app itself. Taqtile previously built sports apps for universities like Stanford and Penn State and did work for President Obama’s inauguration in 2013.

The app came out of beta last month and included founding partners like The Mayo Clinic, EXOS, and Ohio State University, where Smith played college football for two years and had originally planned to attend medical school.

Despite leading the NFC in rushing yards during in 2000, Smith stopped playing as a way to protect his body from further injury. He decided to pursue his passion for science, eventually coming back to Ohio State three years ago to meet with doctors doing work in personalized medicine.

“With my background, I was intrigued with new ways to help make interventions before people got sick,” Smith said. “We kicked around the idea of using sports in some way to be the method of delivery for helpful information.”

Smith then connected with Taqtile, and now the Seattle startup has 15 employees focused on building FHN. The former running back, who is bootstrapping the company so far, has a bevy of potential ideas to both turn revenue and help improve the health of more users by utilizing their passion for sports.

For example, he sees sponsors providing fun prizes like tickets to games as a way to incentivize more interaction with the app. Or, he noted a potential in-app store that could include gym equipment, fitness trackers, or conversations with professional dietitians and trainers.

“The future is just so bright for the potential of catching health-related problems before they start happening,” Smith said. “You can’t afford to wait until people get sick if you really want to drive healthcare costs down. Preventative medicine and human optimization is as cool as it gets for me. It’s really exciting.”