California remains the undisputed leader in venture capital financing, accounting for more than half of all VC dollars in the U.S. in 2014.

But there are other second-tier markets where venture dollars flow, and I’ve been particularly interested in analyzing what’s happening in New York and Seattle.

The latest venture capital numbers from CB Insights show what’s happening in these two developing venture markets, a trend I also pointed out in this story last fall.

As you’ll see in the charts below, VC investments in New York state mushroomed in 2014 — up a whopping 53 percent. Even more impressive, in each quarter in 2014, venture investing totals surpassed the $1 billion mark. In fact, in the third quarter, more money was invested in New York than during the full year in Washington state. 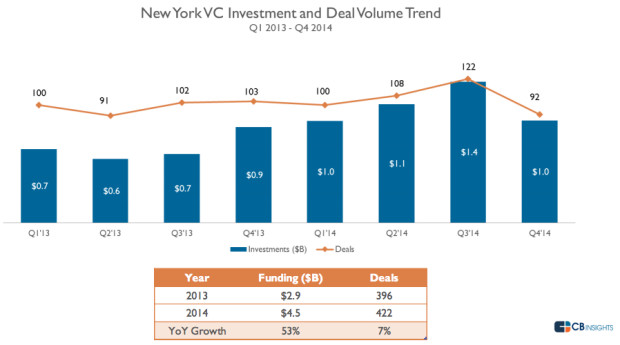 And here’s Washington state, with the Seattle region making up the bulk of the deals. 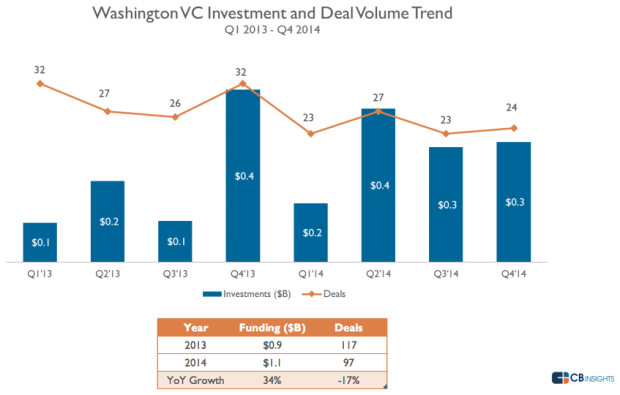 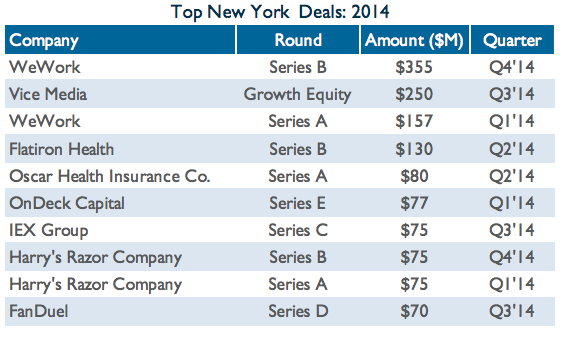 Given that population swing, it’s natural to think that New York would be three times bigger in terms of its venture capital haul. Turns out, at least in 2014, it was more than four times bigger.

The thing that constantly baffles me on this topic is that I can’t name one major tech powerhouse that’s based in New York City. Sure, e-commerce company Etsy is considering an IPO, but it pales in comparison to the tech giants of the Seattle area: Amazon.com, Microsoft, Expedia and T-Mobile.

Seattle has a much deeper and richer history of tech innovation. And it has proven over and over the ability to produce game-changing companies, whether Tableau or Zillow.

That’s where I keep scratching my head. Seattle’s tech ecosystem dwarfs most, with Amazon and Microsoft alone accounting for more than $500 billion in market value. (New York’s tech scene has nothing like that). 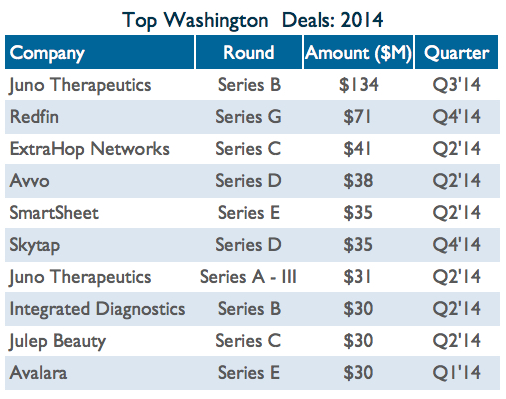 Yet, the startup ecosystem in Seattle — while growing — has not kept pace with New York.

Don’t get me wrong. Washington does punch above its weight when it comes to venture capital financing, ranking fifth in total dollars in 2014 and outpacing bigger states such as Florida, Pennsylvania, Illinois and my rust belt state of Ohio. (My home region of Cleveland-Akron would kill to have the problems facing Seattle).

But New York appears to be distancing itself from Washington state — at least in the money race. While bootstrapping companies is something that is certainly a key ingredient of the Seattle startup scene and something that should be applauded (one of the reason we host a “Bootstrapper of the Year” award at the GeekWire Awards), I am still of the belief that money matters in fueling big, world-changing tech companies.

Not everyone agrees. Seattle entrepreneur Robi Ganguly noted in my last piece:

Seattle is consistently building healthy, growing, customer-obsessed companies. Measuring VC trends is akin to measuring the amount of vermouth someone’s adding to the shaker when making a martini: sometimes more isn’t better for the end result.

Fair point, but venture money does matter — given that nearly every tech giant today needed some of this extra fuel to get rolling.

The chart below shows how New York has capitalized, while the Pacific Northwest (with Seattle as the epicenter of startup activity) has just bumped along. 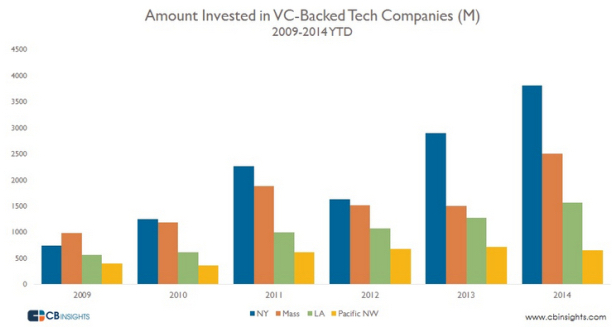 Here were some of the things I pointed out in my last column about what’s holding back Seattle, which I am posting again here.

What does Seattle really need to get things rolling?

The tech talent is here. A world-class computer science department is here. Iconoclastic entrepreneurs are here.

So, here’s one thing that could stir the pot: Just imagine what the Seattle region would look like if three $75 million early-stage venture firms emerged overnight?