OK, folks, let’s just stop with the Silicon Valley comparisons. Seattle is not Silicon Valley, nor do we care to be. (Though based on the number of tech giants from the Valley that have set up operations in the Seattle area lately — eBay, Facebook, Twitter, Salesforce, Splunk, etc. — we are wondering if the Californians have a secret desire to hang out in our mist).

A much more interesting comparison for Seattle and the Pacific Northwest is checking out how the region fares against other technology hubs — like New York, Boston and L.A.

And here’s the bad news portion of the story. Check out these charts from the folks at CBInsights, comparing venture capital investments and deals in four key markets: New York (blue); Massachusetts (orange); L.A. (green) and Pacific NW (yellow). 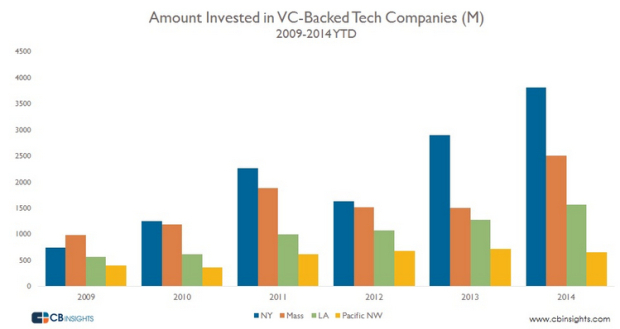 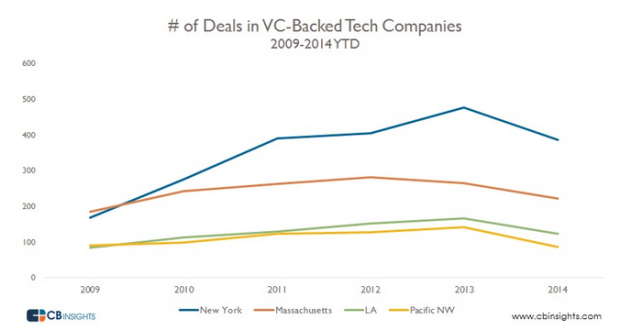 The story is pretty clear, and depressing.

Capital flow to the Northwest — with Seattle being the startup epicenter of the region — has stayed relatively steady while New York and L.A. have seen significant increases. In fact, New York has experienced a whopping 185 percent increase in deals over the past five years.

Meanwhile, venture investment totals in Massachusetts are more than double that of 2009.

The Pacific Northwest, on the other hand, shows a modest haul in investments while deals are flat. We appear to be stuck in neutral, while other regions are accelerating.

There are a host of possible causes:

This is a tough and complex topic, and one we probably won’t completely understand in the course of this column.

And the topic is only muddled when you consider another chart from the same CB Insights’ study. (This is the good news portion of the story).

Check out this chart which shows some of the big “exits” in tech since 2013. 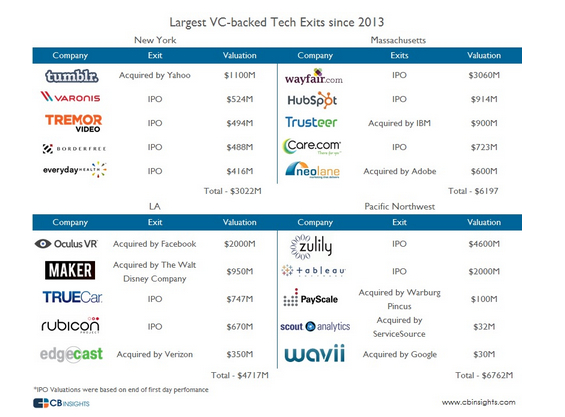 As the chart shows, the Pacific Northwest rules the roost in terms of creating valuable companies — largely on the backs of Tableau and Zulily. In fact, the Northwest showed the largest valuation of exits, with Tableau now valued at $5.6 billion and Zulily valued at $4.6 billion. Even respected venture capitalist Bill Gurley says that New York needs more “iconic” tech companies like Seattle.

I’d be reticent to say the region is stuck in neutral for any one reason but awareness/marketing/buzz do seem to be missing and that may be part of the issue.”

So, just to get this straight. Venture investments aren’t happening in the Pacific Northwest with the regularity of other regions. However, the region is producing bigger exits than its peers.

I’ve tracked the Pacific Northwest startup ecosystem for more than 15 years now, and this one is a true head-scratcher.

Madrona Venture Group’s Greg Gottesman, a Seattle native, also has closely watched the startup community over the years. He said the data shows a shift in capital in the historical financial center of New York into angel and venture investments, a relatively new phenomenon. But Gottesman also said the charts don’t tell the full story, ignoring the migration of technical talent to Seattle.

“During this time period, the Pacific Northwest has had an incredible influx of engineers, some to startups and many to bolster the engineering offices of companies that aren’t headquartered here like Google and Facebook,” said Gottesman. “If you believe as I do that top technical talent is the lifeblood of successful startups, I think the trends are very favorable for our region over the next decade.”

Still, not convinced, I asked an outsider for his take.

Anand Sanwal lives in New York, and crunches numbers for a living as the co-founder of CBInsights.

Baffled by these findings, I asked him for his take. Here’s what he said:

“It’s perplexing honestly as the region has big exits in the likes of Zulily and Tableau, major tech players who call it home (MSFT, Amazon). But in talking with our customers — many in VC, corporate VC, corporate strategy/innovation and M&A —  one thing we’ve found is that the region isn’t often on their mind. We’re often asked about what is happening in NYC or Boston or even L.A. But Seattle, Portland just don’t come up. I’d be reticent to say the region is stuck in neutral for any one reason but awareness/marketing/buzz do seem to be missing and that may be part of the issue.”

Perhaps our greatest strength — our geographic isolation that allows us to think differently and build ground-breaking companies — is also our greatest weakness.