Add Amazon to the list of companies that will deliver food to your doorstop in less than an hour.

The Seattle giant announced today that its Prime Now service now includes delivery from “local stores.” The new feature is live in select neighborhoods of Manhattan, where Prime customers can order groceries and food from D’Agostino, Gourmet Garage and Billy’s Bakery, all of which sell groceries, prepared meals and baked goods.

Prime Now, available to Amazon Prime members who pay a $99 per year fee, offers one-hour delivery for $7.99 and two-hour delivery for free. Prime Now initially launched in Manhattan six months ago and soon after rolled out in Brooklyn. It also became available in Baltimore, Miami, and Dallas in March before arriving in Atlanta and Austin last month.

Prime Now, accessed via a mobile app for iOS and Android, originally offered Prime members a way to have “daily essential” items like paper towels and shampoo arrive at their door within 60 minutes of ordering. It then expanded in April to offer delivery of frozen, chilled food.

The new local store delivery will expand across Manhattan in the coming weeks while adding new stores — Eataly and Westside Market “will be the next to launch,” Amazon said. It’s not clear if Amazon will eventually offer delivery of products not related to food. 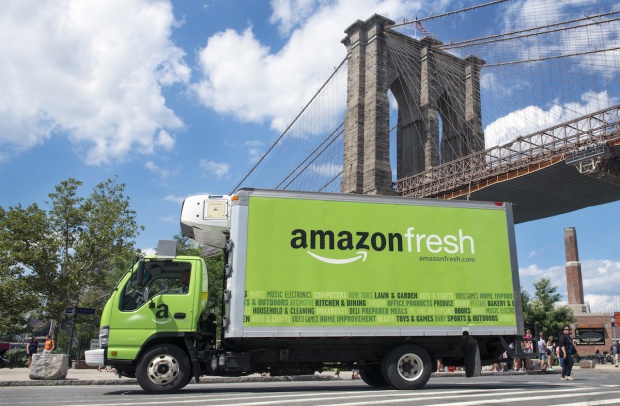 Amazon has certainly dabbled in the grocery delivery space with Amazon Fresh, which launched in Seattle seven years ago before rolling out to Los Angeles, San Francisco, San Diego, New York, and Philadelphia starting in 2013. Amazon recently announced that customers in Seattle would need to buy an $299 Amazon Prime Fresh membership to continue using the service.

The new local store service is similar to Amazon Fresh, but instead is built into the new Prime Now one-hour platform that utilizes bike couriers — who sometimes opt for the subway — who pick up food at a store as opposed to an Amazon warehouse.

There are also the veteran players like Yelp-owned Eat24, GrubHub, and GrubHub-owned Seamless. Even Uber is trying to deliver lunch now, too.

However, Amazon does not charge delivery fees for its two-hour service, given that you’ve already paid $99 for a yearly Prime membership. Prime Now is part of an ongoing effort by Amazon to boost Amazon Prime benefits and cover the “last mile” of delivery.