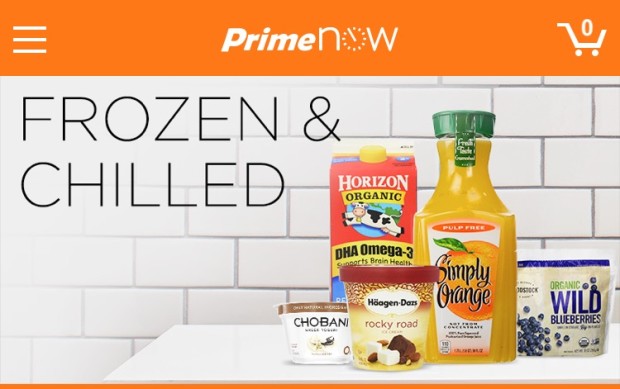 Amazon is now delivering refrigerated and frozen groceries outside of its Amazon Fresh program.

“Prime Now,” available to Amazon Prime members who pay a $99/year fee, offers one-hour delivery for $7.99 and two-hour delivery for free. Prime Now initially launched in Manhattan five months ago and soon after rolled out in Brooklyn. It also became available in Baltimore, Miami, and Dallas in March before arriving in Atlanta and Austin earlier this month.

Prime Now, accessed via a mobile app for iOS and Android, offers Prime members a way to have “daily essential” items like paper towels and shampoo arrive at their door within 60 minutes of ordering.

Now, Amazon is including cold and frozen grocery items as part of its one-hour delivery service. The company said orange juice is the most popular chilled item delivered to customers thus far in NYC.

Prime Now is part of an ongoing effort by Amazon to boost Amazon Prime benefits and cover the “last mile” of delivery, an initiative that also includes the Amazon Fresh grocery delivery service, which started in Seattle before rolling out to other cities across the country.