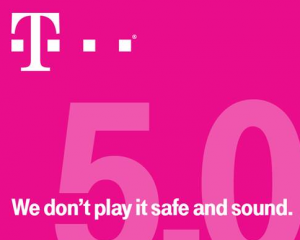 What does John Legere have up his sleeve now?

Get ready for another wireless industry shake-up from T-Mobile. The Bellevue-based company sent invitations out to journalists today announcing its next “Uncarrier” press event will be held in Los Angeles on June 18.

The invitation, which dubbed the event “Uncarrier 5.0,” came with a tease saying that it will be all about showing how T-Mobile “doesn’t play it safe and sound.” That would seem to indicate that there’s some sort of music announcement afoot. The most likely option would be a partnership between T-Mobile and a music streaming service, which would allow customers to listen for free or at a discount while they’re on a T-Mobile contract.

Spotify has already partnered with Sprint, and Apple just announced that it will buy Beats Music (which also has a partnership with AT&T). That leaves Rdio, Pandora and Rhapsody as the major potential players for a streaming music deal. T-Mobile is no stranger to similar deals, either: the carrier’s customers can get access to MLB At Bat during baseball’s regular season this year.

MetroPCS, which merged with T-Mobile last year, partners with Seattle-based Rhapsody to offer its music subscription service to customers.

The Uncarrier events have all been about solving traditional pain points in the cellular industry: in the past, T-Mobile has done away with contracts, offered to cover subscribers’ early termination fees, offered users a way to upgrade their phones more quickly, and more.

While those changes have helped drive new user growth for the company, it has been hard pressed to turn the new customers into profits. Still, the company has shown signs of quietly rolling back the most costly parts of its aggressive promotions this year, like requiring users of its JUMP early upgrade plan to pay off half the value of their phone before they can trade it in for a new model.