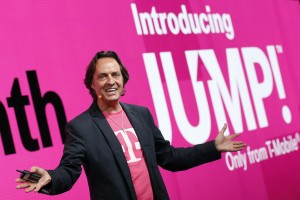 T-Mobile is changing its JUMP (Just Upgrade My Phone) plans to allow customers to upgrade their phones whenever they want … with a catch.

Instead of requiring customers to wait six months before they trade in their phone for a new one, people who pay for their phone in monthly installments using JUMP will now be able to get a new phone whenever they want starting Feb. 23, a T-Mobile representative told GeekWire via email. In addition, people will be able to get a tablet from T-Mobile with a JUMP plan.

However, T-Mobile will now only cover up to 50 percent of the total value of the old device if a user chooses to trade it in early, so if customers haven’t paid at least 50 percent of the cost of themselves through the monthly installments, they will have to pay the remainder, to get up to the 50 percent mark.

If the customer has already paid at least 50 percent of the cost of the existing device through monthly installments, they can still make the upgrade for free under the new JUMP plan.

In the past, when someone bought a new phone with JUMP, they would have to pay a down payment on the phone and would begin paying it off in monthly installments, plus the $10/month charge for JUMP (which remains in effect). Once they had been in the JUMP program for six months, they’d be able to trade in their old phone for a new handset up to twice a year for free.

In all likelihood, the change won’t make much of a difference for customers who just want to upgrade to the next version of their particular phone. Most smartphone manufacturers announce upgrades about a year apart from one another, which is about when users should be paid off enough to make a free switch. Existing JUMP customers will be grandfathered onto the old plan, though they can also choose to switch to the new, unlimited-upgrade plan.

The news comes as rumors continue to swirl about a possible merger between T-Mobile and Sprint. While the two companies are reportedly in negotiations with one another, opposition from U.S. regulators may put a deal on ice.

It seems like T-Mobile made the change to stem the tide of new customers aggressively taking advantage of the opportunity to upgrade their phones. As the company’s “Uncarrier” moves spur more and more people to move to the Bellevue-based carrier, moving away from JUMP’s more permissive provisions is probably good for T-Mobile’s bottom line.