T-Mobile announced today that starting on March 23, customers who are using the company’s Simple Choice plan will get more bang for their buck. Users will get unlimited voice, texting, and 1 GB of 4G data and tethering  for $50 a month. That’s double the amount of data T-Mobile has offered for the same price in the past. In addition, all Simple Choice plan users will get unlimited texting to 122 countries outside the U.S.

I feel like a certain talk show host – You get free stateside international text, and you get it! And you! EVERYONE gets it!!

As in the past, users who go over their data allowance will still get unlimited 2G data. For an additional $10 every month, users can get 3 GB of data (up from 2.5 GB). For $20, users get 5 GB of data and tethering, and $30 a month gets users unlimited data and 5 GB of tethering. That’s a break from the past for the Bellevue-based carrier, which used to offer unlimited data and 2.5 GB of tethering for an additional $20 a month.

Customers who are already signed up for the cheaper existing unlimited plan will be grandfathered in, though they can also choose to pay more for unlimited data if they want the increased tethering quota. According to T-Mobile’s press release, unlimited data plan users are now using more than 5 GB of data a month on average, which sparked the change.

These changes come after T-Mobile changed its JUMP program last month to require that users pay off half of a phone’s value before being able to trade it in for a new upgrade. In each case, T-Mobile offered a very aggressively-priced program in order to attract new customers, and is now stepping back from the most costly component of that program, while still offering other changes.

For people who aren’t interested in unlimited data, the new changes are a big win. For those folks thinking about changing service over to T-Mobile in order to take advantage of their unlimited data plan, this might cause a bit more pause.

Here’s a chart that shows a breakdown of what T-Mobile is now offering: 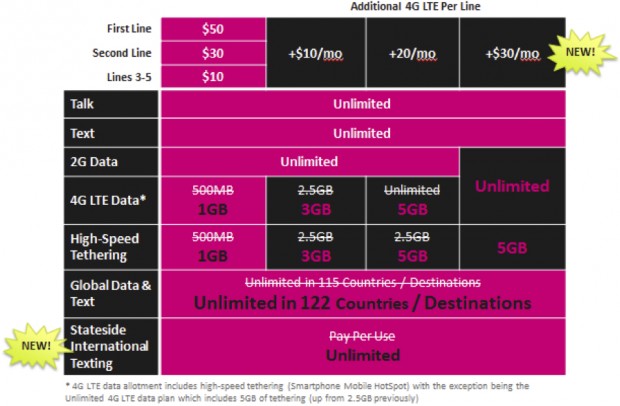