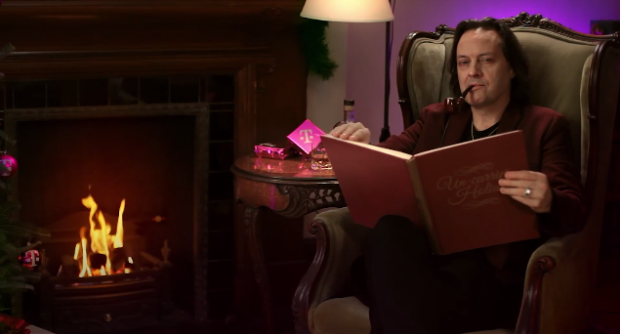 Just because it’s the holidays doesn’t mean that T-Mobile John Legere is taking a break from lambasting his competitors.

The outspoken CEO just posted his own version of “‘Twas the Night Before Christmas,” and unsurprisingly boasted about T-Mobile’s successes this year while poking fun at AT&T, Verizon, and Sprint.

With his legs crossed, book in hand, and fireplace burning behind him, Legere touted T-Mobile’s Q3 results, its “Un-carrier” moves, and the fact that he spends hours a day responding to customers on Twitter.

“And while Randall is nestled all snug in his bed, I’m up responding to tweets removing pain points instead,” Legere recites in a shot at AT&T CEO Randall Stephenson.

“Do the carriers give, not even a shit? Do their CEOs tweet back?” Legere says later. “Nope, not one bit.”

Here are the lyrics in full:

‘Twas the holiday season, but the carriers had no cheer; the Un-carrier had them worried, ’twas us they’d come to fear.

Our Q3 numbers were posted with care; fastest growth, fastest network, best service all there.

And while Randall is nestled all snug in his bed, I’m up responding to tweets removing pain points instead.

And now for a gift: How about 10 GB for free? And with rolling data, unused GB you’ll still see.

So while AT&T and Verizon cling to contracts and red tape, we’ll gladly take their customers who Sprint to escape.

With great employees like ours so giving and quick, customers know in an instant with us they must stick.

Do the carriers give not even a shit? Do their CEOs tweet back? Nope, not one bit.

But we’re first in service, said J.D. Power; it’s no big surprise with employees like ours.

In all this success, do we sigh, now we’re done?; hell no, the Uncarrier has only begun.

And to our customers, for you, we’ll continue to fight. Happy holidays to all, and to all a good night.