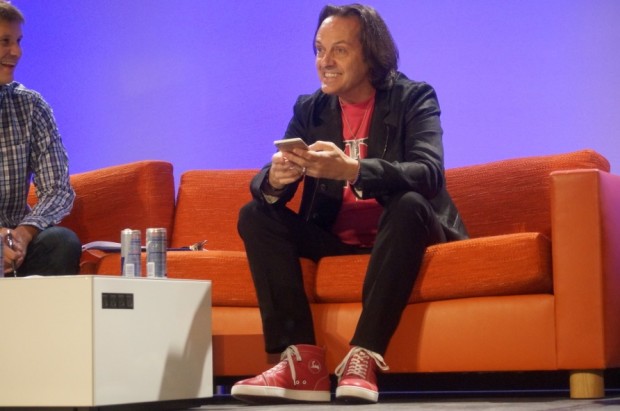 That’s a fairly normal Tweet for T-Mobile CEO John Legere, who’s known for his vivacious and outspoken Twitter presence, which involves references to Batman, jabs at his competition and discussions of everything from dance music to World of Warcraft.

But while the message may seem outlandish, it’s not all fun and games.

“The truth is, I learn almost everything I need to know to run T-Mobile in there,” he told an audience at the GeekWire Summit earlier this week. “On the email from individual customers or on Twitter. I take every Tweet that comes in and I read it. I forward it to people. My executive team gets them, we reply, and at my staff meeting every Tuesday, we track social media impressions, what they are and how we’ve responded to them. It takes a ton of time, it’s a lot of fun. You got to be real, and you got to be out there. But I am having a ball with it.” 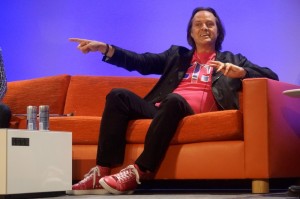 Legere said that he posts all his own Tweets – even going so far as to take a selfie while GeekWire Co-founder Todd Bishop was in the middle of asking him a question. According to him, that personal commitment to spending time on the social network is why he’s not afraid of other wireless industry CEOs copying his moves.

“The reason I know they won’t be able to take advantage of what I do is that there’s no f––ing way they’re going to be able to spend their day doing what I do,” he said. “I wake up in bed, and I do Twitter for an hour and a half just to catch up.”

Legere outlasted many at the GeekWire Summit after-party, hanging with guests, chatting with customers and taking photos, many of which were promptly shared to Twitter.

That sort of engagement with social media (and customers) has been key to the company’s “Uncarrier” moves. Legere said that listening to customers on Twitter and monitoring support calls gave him and the rest of his team information about what pain points they can solve to set T-Mobile apart from its competition and draw even further customer growth.

“I listen, and I respond,” said Legere matter-of-factly about his Twitter strategy, noting how he called an upset customer he met over Twitter to talk through some issues. That sort of one-to-one interaction, not to mention some of his wild ramblings, has led Legere to accumulate 555,000 followers on the social network. In fact, Legere agreed to speak at the GeekWire Summit after co-founder John Cook reached out to him via Twitter.

I love how @Twitter gives so much voice and power to public sentiment! That’s why I use it so damn much! http://t.co/Zg5zMfYbnN

Legere also isn’t afraid to go after his much larger rivals at AT&T and Verizon, the subject of many of his barbs. Consider this Tweet after Cincinnati Bell completed the sale of its wireless business to Verizon this past week.

Hard to watch @att, @verizonwireless and @sprint continue to confuse customers with their one-upping each other and data “deals.” #wrong

You could write off Legere’s use of Twitter as the ramblings of an off-the-wall tech exec, but his actions are much more calculated. He’s combining the outrageous Twitter antics with bold action at T-Mobile.

Past moves have included doing away with traditional contracts, and allowing customers to stream music to their devices for free without it counting against their data plans. They’ve been a big success for T-Mobile, which has reported massive subscriber growth – Legere said that he expects the company will see the net addition of 8 million customers this year.

What’s more, Legere says that T-Mobile’s work on Twitter has been a boon when it comes to improving its brand recognition, and drawing the attention of other companies. That, in turn may work in T-Mobile’s favor when it comes to finding companies that might acquire them.

“Silly things like Twitter, they’re not silly, what we do on Twitter,” said Legere, who joined the social network on the prodding of his daughter. “We’ve got a relationship on Twitter that’s growing with customers, and that’s something that many people are interested in.”

For more insights from Legere’s talk, check out the full video here or below, and listen to his remarks about Twitter starting at minute 11:30.