T-Mobile continues to add customers at a record pace and today reported a net addition of 2.3 million subscribers during the third quarter.

The Bellevue-based carrier’s growth included the addition of 1.4 million branded post-paid customers, a coveted category for wireless carriers. It was the sixth-straight quarter of customer growth of more than 1 million for T-Mobile, which has implemented a series of new offerings over the past year as part of its “Uncarrier” strategy under CEO John Legere.

Those changes include shifting customers away from the long-term contracts that have defined the wireless industry, offering early upgrades, free international data roaming, and paying early termination fees for people who switch to T-Mobile, the nation’s fourth-largest carrier. 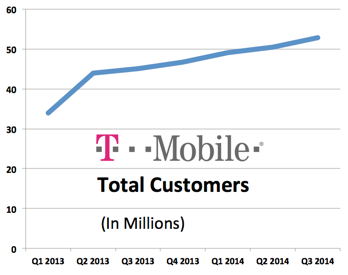 However, despite the growth, T-Mobile is taking a hit on its bottom line. The company reported a quarterly loss of $94 million, or 12 cents a share. Analysts expected the company to report a profit of 3 cents a share. This comes after T-Mobile posted $391 million in profit during the second quarter.

The nation’s fourth-largest carrier has added more customers in attempt to catch its competition, including third-place Sprint, which started rolling aggressive new rate plans in late-August that caused AT&T and Verizon Wireless to respond.

In early October when Legere appeared at the GeekWire Summit, he hinted that the quarter had been strong.

“I’m tempted to tell you about September,” he said, jokingly. “There’s a lot going on in the wireless industry that can be explained by what’s happening in the competitive environment. We are kicking the shit out of these guys right now.”

In September, Legere bodly predicted that T-Mobile would pass Sprint in customers by the end of 2014.

“We will overtake Sprint this year, and next on our list is AT&T,” he said.

Sprint had been interested in acquiring T-Mobile this year, but the company gave up those aspirations in August. French telecommunications company Iliad also dropped its own bid to purchase T-Mobile earlier this month.

Legere is speaking at the Code/Mobile Conference in Half Moon Bay, Calif. to discuss results tonight at 7:30 p.m. PT and will further talk about third quarter results during an earnings call on Tuesday morning at 8 a.m. PT.

Unsurprisingly, Legere posted a series of tweets this evening after the earnings posted:

Nearly 53M customers & they keep coming to the #uncarrier. Why? Because we listen to our customers and deliver on our promises! #simple

10 MILLION customers have joined @tmobile in the last 6 quarters! That’s 10 million more that have seen through the BS of this industry!

And we’re the first to #unleash the power of Wifi (not that they would if they could!) #uncarrier