T-Mobile’s Un-carrier 8.0 announcement is a new plan called “Data Stash” that will let its customers roll over their unused data each month into an allotment that they can use for up to a year. 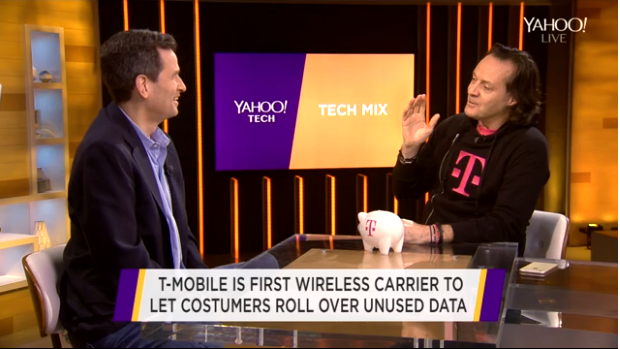 T-Mobile CEO John Legere announced the initiative in a live video stream this morning, interviewed by David Pogue of Yahoo.

“It is arguably the biggest thing we’ve done since Un-carrier 1.0,” Legere said, noting that data rollover is one of the biggest requests from customers he talks with on Twitter.

For example, a T-Mobile customer with 3 GB of monthly 4G LTE data who uses only 2 GB of data will get 1 GB of data put into the Data Stash to essentially increase the allotment of data for future months. T-Mobile would otherwise slow down the data speed if a customer reached the monthly limit.

Despite upgrades, T-Mobile’s network still has plenty of room to improve

T-Mobile has been steadily adding customers as a result of its Un-carrier moves, including shifting customers away from the long-term contracts that have defined the wireless industry, offering early upgrades, free international data roaming, and paying early termination fees for people who switch.

After acknowledging that he wasn’t supposed to swear on the Yahoo live stream, Legere went on to deliver his traditional barrage of f-bombs. For example, “If you’ve got anything good that I can do to tick them off, I’ll tick the f***ers off right now,” he said of Verizon, AT&T and Sprint.