Sprint Chairman Masayoshi Son wants to buy Bellevue-based T-Mobile, in part so he can launch a “massive price war” against rivals Verizon and AT&T. Son, the president of SoftBank, made the remarks in an appearance on Charlie Rose.

“We need a certain scale, but once we have enough scale to have a level fight, OK,” Son said in the interview with Rose. “It’s a three-heavyweight fight. If I can have a real fight, I go in more massive price war, a technology war.”

In Japan with SoftBank, Son used aggressive pricing tactics to compete with its rivals.

Under the guidance of T-Mobile boss John Legere, the wireless carrier has set out on a mission to upend the wireless industry, a strategy that appears to be working.

Son is making the rounds in the U.S., trying to drum up support for the idea of combining Sprint (No. 3 wireless carrier in the U.S.) with T-Mobile (No. 4). Today, he plans to deliver a talk in Washington D.C. to the U.S. Chamber of Commerce.

Chatter of regulatory headwinds have slowed a potential deal between the two carriers. William J. Baer, an Assistant Attorney General for the Justice Department’s Antitrust Division, said in an interview with the New York Times earlier this year that it would be “hard for someone to make a persuasive case that reducing four firms to three is actually going to improve competition for the benefit of American consumers.” FCC Chair Tom Wheeler is also skeptical of a merger, according to a report from Reuters.

Last month, word spread that Sprint was lining up as much as $45 billion to make a run at T-Mobile. Here’s a look at how the industry has consolidated over the past 10 years, reduced from seven to just four main players. T-Mobile has been part of that consolidation wave in the past, buying Metro PCS in 2012. Meanwhile, as you may recall, AT&T canceled its $39 billion bid for T-Mobile in 2011 after running into regulatory walls. 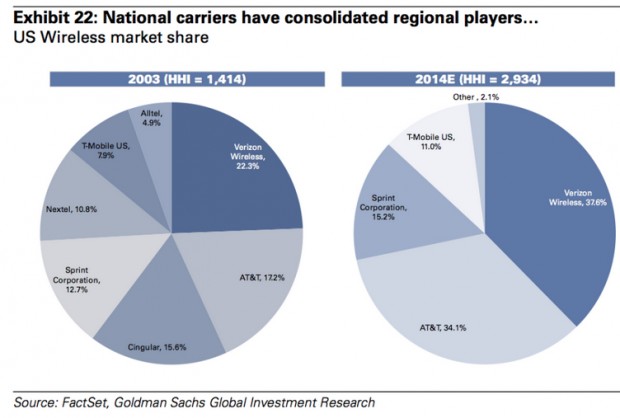