This is pretty hilarious stuff. President Barack Obama goes toe-to-toe with comedian Zach Galifianakis on “Between Two Ferns” — with the two shooting from the hip as they touch on everything from gay marriage to football to Bradley Cooper.

The best part is when Galifianakis — star of the Hangover — references Microsoft’s ill-fated music player, the Zune. Here ya go: 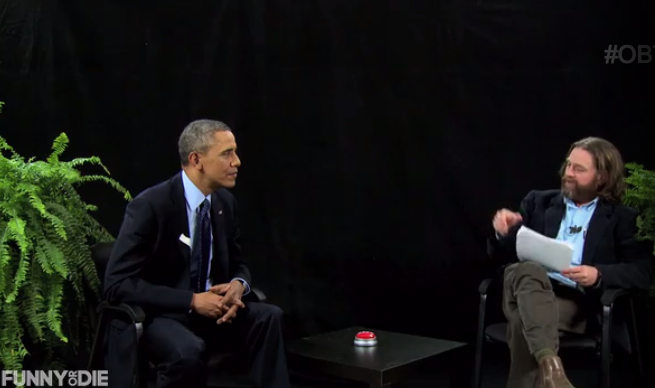 Obama: Have you heard of the Affordable Care Act?

Galifianakis: Oh, yeah, I heard about that. That’s the thing that doesn’t work. Why would you get the guy who created the Zune to make your Web site?”

A bored Galifianakis looks at his watch.

It appears that Galifianakis — who starts out the interview with Obama asking about pardoning turkeys — is a bit misguided in his reference to the former Microsoft leader now leading HealthCare.gov. That job falls to Kurt Delbene, who while at Microsoft oversaw the Office division, and it didn’t have much, if anything, to do with Zune.

Chalk it up to comedic license, something Galifianakis has clearly mastered. Enjoy!