Over the past few years, Seattle entrepreneur Nick Soman had made significant progress with his matchmaking platform, LikeBright. The company participated in the Techstars Seattle program in 2011, reeled in money from Microsoft Ventures and prominent investors, while also acquiring other startups.

“I feel confident we’ll have millions of users around the world in the next year,” Soman told GeekWire this past December.

But LikeBright didn’t quite pan out the way Soman’s team thought. Now, the company is shifting gears and on Thursday unveiled a new anonymous chat app.

Debuting today, Reveal is an iOS app that “helps others overcome loneliness and make safe and authentic connections.” It does this by relying on anonymity, allowing users to reach out to anyone and then reveal information about themselves — name, photos, location, etc. — depending on how well the initial interaction goes. 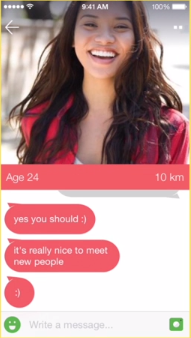 “We think there’s an opportunity to get instant connection right by putting users in control of what they share,” said Soman, a Stanford University and Harvard Business School grad who previously worked on the Amazon Kindle team.

So why didn’t LikeBright work out? While Reveal is mobile-only, LikeBright was on desktop and aggregated information from online sites like Facebook to help match those looking for a partner. Soman admitted that he picked the wrong form factor — “people want to connect on their phones,” he says — and noted how Reveal has more of a focus on curing loneliness rather than just dating.

“LikeBright taught us how to make connecting apps work for a lot of people, and that the hard part is making them feel safe and worthwhile for women,” Soman told GeekWire today. “But people want to use social apps when they’re looking to connect, and that happens all over the place — especially on their phones.”

The company, which is based in the old Makerhaus building, has raised about $2 million — it is using $1 million it brought in just before pivoting, and another $1 million it raised earlier this year to build Reveal. Investors include Seattle super angel Rudy Gadre, former Amazon executive Owen Van Natta, and Porter Gale, former VP of Marketing at Virgin America. The original LikeBright team is still intact and has grown over the past year.

In beta tests, Reveal had 6,000 chatting users send more than 800,000 messages. More than 60 percent of those chatters returned to the app.

“I believe there is magic in the power of connections,” Gale said in a statement. “Reveal has a beautiful user interface and early user tests have been overwhelmingly positive. Finally, an app has launched that gives people a safe and user-friendly way to chat around the globe.”

However, there actually is already an app also built in Seattle that uses anonymity to help people build connections. That would be Anomo, which raised $800,000 from Orca Bay Capital, Maveron, and angel investors like Kiss.com founder Lee Zehrer this past July.

Anomo uses anonymous profiles and icebreaker questions to allow people to reveal more personal information over time. Founder James Sun told GeekWire this morning that the startup filed an “extensive” patent one year ago — it’s currently still pending — on the process of using a digital anonymous character to reveal a real life person with personal information in a social app experience.

“These guys would be infringing on that particular patent,” Sun said.

Sun noted that while he likes “multiple companies validating this model,” it’s clear that Anomo was first to market with the idea of connecting people with profiles that start anonymous and reveal information over time.

“We knew that once we did this, a lot of companies would do it,” Sun said.

Anomo, which was founded in 2012 and has raised $1.4 million to date, has more than 300,000 monthly active users spending an average of 37 minutes per day with the app, and more than two-thirds of users are women.

Sun said that he didn’t know about Reveal before today.

“Some of their investors saw our pitch as well,” he said. “I don’t know how exactly i feel about it. It is what it is, and it’s the nature of startups.”