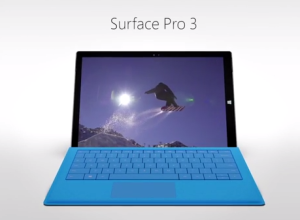 Well, this is refreshing — a Microsoft TV spot that doesn’t bash Apple.

The Redmond giant’s newest Surface Pro 3 ad uses reviews from The Verge, Stuff.tv, and TIME that tout the company’s tablet as “the most beautiful thing Microsoft has ever produced,” and, “one of the 25 best inventions of 2014.”

“The tablet that can replace your laptop,” reads the messaging at the end of the 30-second ad titled “Accolades.”

A majority of Microsoft’s recent ads — both featuring the Surface and other products like its virtual assistant, Cortana — have included a jab or two at Apple, from “Winter Wonderland” to “Crowded” to  “Head to Head” to “Power” to “Groundhog Day” to “Lost” to “Remind Me.”

Apple, meanwhile, has generally stayed away from talking about Microsoft in its advertising — a far cry from the popular Mac vs. PC ads that the company ran in the late 2000s.

Check out Microsoft’s new ad below. The commercial features the 2NE1 song “I Am The Best,” which, depending on your musical tastes, is either super catchy or super annoying — perhaps both.