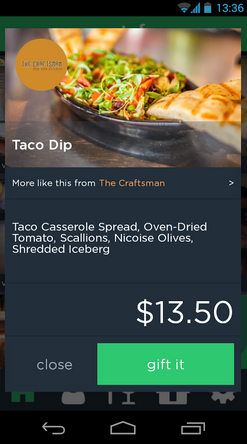 Seattle-based Gratafy continues its expansion and today announced the availability of its app in Chicago.

Already in Seattle and Los Angeles, the Windy City marks the third metro hub for Gratafy, which lets users send specific food and drinks from local restaurants, bars and nightlife venues to friends as gifts.

“Chicago’s globally recognized culinary scene, high-energy nightlife, strong social culture, and the fact that Chicagoans are just some of the nicest people in the world really complement our core purpose: to foster deeper personal connections through the age-old tradition of buying someone a gift,” co-founder Brian Erke told us.

Erke and his fellow University of Washington grad Ryan Halper launched Gratafy in November 2012 as a way for people to buy drinks, desserts or other menu items from restaurants for friends who may be celebrating anniversaries, birthdays or other special occasions.

Gratafy has made a series of updates since we last wrote about company in August following its $1.45 million round. The service originally only allowed the sending of gifts to Facebook friends, but the company now has a new login platform that enables text and email delivery, too.

Gratafy is also allowing restaurants to send gifts to customers after hearing demand for the feature from its 400 merchant partners. In addition, company also built widgets that allows merchants to sell gifts directly on their websites.

Erke said that Gratafy will be in three more cities by next month. The company employs 15 and has raised $2.5 million to date. Its app is free to download for both iOS and Android.