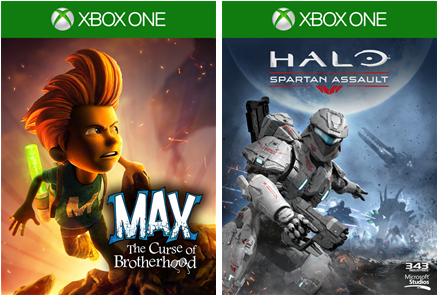 Xbox One owners that have an Xbox Live Gold membership can download two free games starting today: Max: The Curse of Brotherhood and Halo: Spartan Assault.

The deal is part of Microsoft’s Games with Gold promotion and today marks the first Xbox One games that are free for Xbox Live Gold members. The program, which offers up two free games per month, has already been in place for Xbox 360 owners. However, unlike the Xbox 360 program, if you cancel your Xbox Live subscription, you won’t be able to access the Xbox One games you downloaded for free from the program.

As part Games with Gold’s one year anniversary, Xbox 360 owners can download an extra game in June. Dark Souls is available until June 15, while Charlie Murder and Super Street Fighter IV: Arcade Edition can be downloaded from June 16 to June 30.

Xbox One owners can also take advantage of June’s Deals with Gold program starting today, which is offering 50 percent off of Crimson Dragon.

Microsoft announced in May that starting this month, anyone with an Xbox One or Xbox 360 — regardless of Xbox Live Gold membership status — will be able to access more than 170 gaming and entertainment apps, including Netflix, Hulu and ESPN, all of which previously required Xbox Live Gold. Xbox One owners will also be able to use Skype, OneDrive and OneGuide without a membership.