An energy-saving water heater. A portable security system. And light-switches that can be controlled from a smartphone, anywhere in the world.

Welcome to the future home — a connected place where air quality can be remotely tracked and cooking stoves can be automatically turned off. This smart home, talked about for decades, may finally be here based on some of the devices displayed today in Seattle.

Ten entrepreneurs from around the globe pitched their business ideas as part of the Home Automation Demo Day, presented by Microsoft Ventures and American Family Insurance. The entrepreneurs have been diligently working on their ideas for the past four months in Seattle, unveiling their creations today in front of a packed house of more than 350 attendees in the South Lake Union neighborhood.

Many of the creations are already on the market, or just a few steps away.

Heatworks CEO Jerry Callahan drew a big round of applause when he told the crowd that his company had just secured a contract with a multi-family apartment developer who’d pledged to buy at least 8,000 units of his energy-efficient water heater.

“It’s pretty exciting,” said Callahan, adding that the 13-person company is opening up an entirely new arena in the water heating industry.

Several of the startups showed off technologies to make the home more secure, including Plum whose smart light switches (pads, really) are controlled from a smartphone, making a home appear as if it were occupied when away on vacation or at work.  “You will never come home to a dark house again,” said Plum CEO and co-founder Utz Baldwin.

He noted that people interact with light switches more than any other device in the home, one of the reasons that it is just “screaming for innovation.” Baldwin said Plum is attempting to “reinvent the light switch” as we know it, with an easy to install system that’s reminiscent of the Sonos music players or Nest smoke detectors. A 10-pack of the lightpads costs $859, and Baldwin said it can be set up in minutes.

Tyler Crawford, the CEO of Novi Security, wowed the crowd with his pitch of the $199 portable home security device that includes a motion sensor, an HD camera, a siren and a smoke detector — all wrapped into one piece of equipment that can be easily controlled from a smartphone. Two-thirds of home security users turn off their systems, in part because they are just too darn hard to use, he said.

“This is instantaneous. It is simple. It gives you the power in your hand to control — you can call the police, you can ask for more pictures, you can sound a siren that is so loud it will blow the doors off the house,” said Crawford, adding that the startup blew past its $80,000 Kickstarter goal and is now looking to ship the device in the first quarter.

Novi was not the only startup taking a crack at the home security space. Sentri too boasted a device to protect the home from the comfort of one’s smartphone, monitoring motion, temperature, humidity and air quality.

Co-founder Yen Tung agreed with the earlier presenter from Novi that home security systems are too complicated and often overreact. His upstart raised more than $390,000 in a Kickstarter campaign earlier this year to help solve that problem.

“It is very simple, all in one. No installation at all,” boasted Tung.

Here’s a look at the 10 companies that participated in today’s Demo Day event, held in a packed event space with more than 350 attendees. 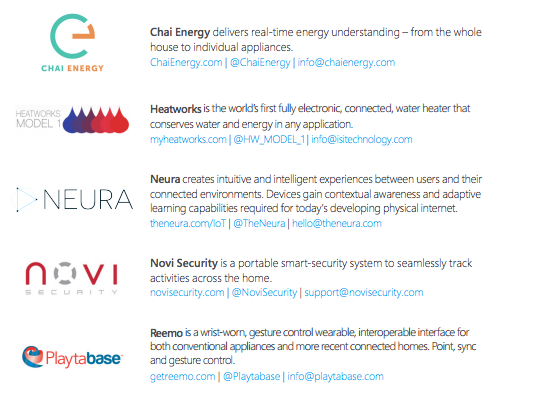 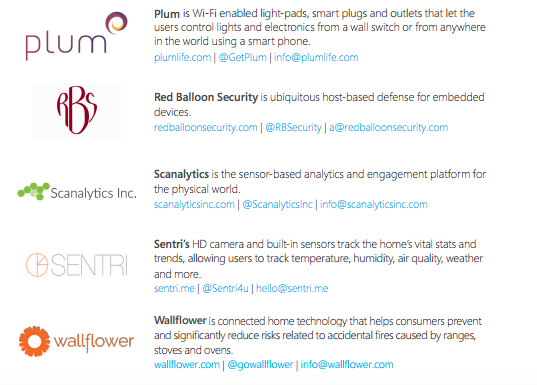