Let’s hope they used DocuSign to seal this deal.

The electronic signature powerhouse just scored $85 million in fresh funding, a huge injection of cash that the company will use to expand internationally; support its growing line of products and enhance marketing efforts in key segments such as real estate, finance and insurance.

Total funding in DocuSign — which operates with a dual headquarters in Seattle and San Francisco — now stands at a whopping $210 million.

Chief Financial Officer Mike Dinsdale declined to disclose the valuation, or the names of the big institutional investors who led the round. The Wall Street Journal pegs the valuation at $1.6 billion. Some of the company’s past investors — which include Google Ventures, SAP Ventures, Comcast Ventures, Kleiner Perkins Caufield & Byers, Ignition Partners and others — participated in the funding.

So here’s the key question for DocuSign: Why not an IPO? 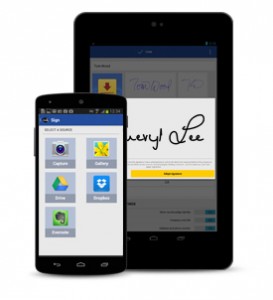 Dinsdale says they routinely evaluate the public markets, and they very much operate DocuSign in the spirit of a public company. But, for now, an IPO is not the “primary focus” and “there’s no rush to go public,” he says.

“Doing an $85 million round, it is quite similar to an actual IPO, with a few differences,” he said. “We think about the things we want to do, and it just felt to us that being a private company for a little longer gave us more freedom to continue to pursue our opportunity aggressively.”

He added that DocuSign is very much at the scale of other large software companies that have recently gone public, such as Marketo ($1.6 billion market value); FireEye ($10 billion) and Splunk (market value $10 billion). The goal, he said, is to build a company that lasts for 50 or 100 years.

DocuSign was founded in Seattle more than a decade ago, and it still maintains a large presence in the region. In fact, though Dinsdale and CEO Keith Krach are based in San Francisco, Seattle remains the company’s largest operation with more than 350 of the company’s 700 employees. It plans to top 1,000 employees worldwide later this year, with Seattle remaining the nexus for inside sales, support and engineering.

“We are committed to both geographies,” said Dinsdale.

The company will continue to grow at is main offices, but it also plans a big global expansion adding to its offices in London and Sydney as well as opening new operations in Brazil and Japan. At this point, just five percent of the business is international, meaning there’s a huge untapped market overseas.

“We believe that all businesses and all individuals around the world are our potential addressable market for us. That’s seven billion people,” said Dinsdale, adding that they are really just starting to put down their “global footprint.” In that regard, Dinsdale said he thinks they can build a network around e-signatures that’s as big as LinkedIn or Facebook, especially as mobile signatures start to take off.

“Mobile signing, for us, is starting to double every at higher and higher rates,” he said.

Part of the plan is to turn the DocuSign into a secure cloud-based platform that helps power business around the world, not unlike what Visa has done for commerce. The savings of adopting e-signatures can be significant, especially on a global scale when considering the costs associated with printing, faxing and shipping documents over night.

About 95,000 companies are using DocuSign, with the company boasting about 40 million users worldwide. Revenues are growing at more than 70 percent year-over-year. And firms such as Morgan Stanley and Merrill Lynch are standardizing on DocuSign, which competes directly with Adobe’s EchoSign.

“We feel like we are in a very good spot. We respect all of our competitors and we take everybody seriously, of course,” said Dinsdale. “But we feel like we have the right strategy and we are executing well.”

And what about those financial docs to close the $85 million venture round? Was DocuSign used?