San Mateo, Calif.-based NetSuite is a powerhouse in the business software arena, a 16-year-old company with more than 2,500 employees and a market value of nearly $7 billion.

But a six-year-old Seattle area startup is looking to take some chunks out of NetSuite’s ERP armor, and it just landed $13.3 million from some big players to help make that mission a reality.

There’s certainly no love lost between Roskill and his much bigger rival NetSuite. In an interview with GeekWire, Roskill said that Larry Ellison-backed NetSuite plays “dirty,” adding in a press release that the Acumatica service offers a “modern alternative to the Netsuite blackmail.”

With the new funding in the bank, Roskill said that Acumatica will be able to invest in some key business areas while striving for profitability by the end of next year. (NetSuite also is losing money, posting a $23.2 million net loss during the second quarter. It reports financial results for the third quarter on Thursday). Roskill said that Acumatica will likely double its revenue again next year. 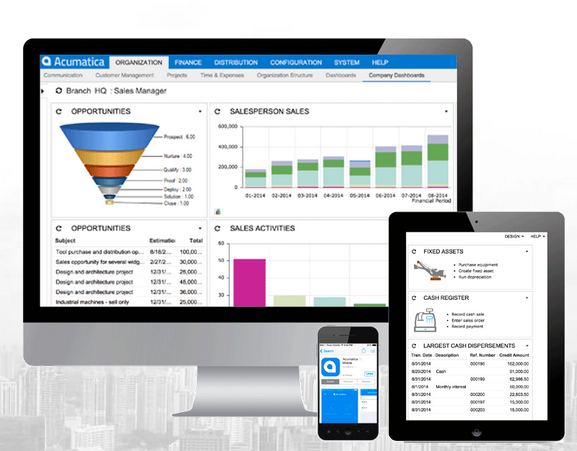 “At that point, we start to become — probably the best word to use — is dangerous,” Roskill tells GeekWire. “Right now, we are more than a distraction or annoying, but our goal is to really become dangerous to someone like a NetSuite.”

As it stands now, Roskill said they bump into NetSuite on about 20 percent of deals, with each company winning about half of those bids.

Acumatica also is trying to swoop up customers who rely on Microsoft Dynamics, a suite of tools that help businesses manage finance, inventory and business intelligence. Microsoft bolstered its efforts in that arena back in the early 2000s when it purchased Great Plains Software for nearly $1 billion and Navision for $1.45 billion, but Roskill said more recently the software giant has been unclear with its plans for Dynamics. He said many in the industry have been waiting to see what Microsoft CEO Satya Nadella does with the business, a unit that Nadella previously ran.

“We have been pretty successful at coming in and taking our case to those partners,” said Roskill, noting that Collins Computing in California recently started re-selling Acumatica in addition Dynamics. “My history with Microsoft makes it relatively easy to get a phone call with these guys.”

Roskill also noted that Microsoft is pushing upstream, going after larger enterprises rather than small and medium-sized businesses where Acumatica wants to play. That’s putting Microsoft more in competition with SAP and Oracle in terms of the size of implementations.

Right now, we are more than a distraction or annoying, but our goal is to really become dangerous to someone like a NetSuite.

“That’s probably a good thing for Microsoft, but it has created this thing that I call mid-market abandonment,” said Roskill. “For us, it is a good thing because it has really opened up this territory very widely for us to come in and be the mid-market cloud ERP player. And that is what we are trying to do.”

Roskill estimates that there are about one million customers in the mid market, and just seven percent of companies have switched onto cloud-based ERP.

“We announced our 1,000th customer at our Summit a month ago, so I was telling everyone that that means there are still 930,000 more for us to go and sign up,” said Roskill with a laugh.

In addition to annoying NetSuite, Acumatica plans to ramp up hiring. The company employs 110 people worldwide, including a large development and engineering center in Moscow, part of the company’s history connected to founders Mike Chtchelkonogov and Serguei Beloussov.

Acumatica currently is working on its 5.0 version, which is slated to be released at the end of this year. He said the key to the Acumatica service is the ability to integrate various cloud services, making it easier for customers to integrate and manage data. It also is a more modern product than NetSuite, which was founded in the late 90s.

“We think an ERP platform is a place to be an aggregation point that makes a lot of sense,” Roskill said. However, one challenge for Acumatica is that most companies don’t really like to switch their ERP platform, with Roskill noting that “switching cost” with most players making a transition about every 10 years.