Krishna Venkatesh, a Microsoft Windows program manager, will be the subject of a search Tuesday morning at Deception Pass State Park, 80 miles north of Seattle, where his car was discovered in a parking lot over the weekend, according to friends and co-workers.

Venkatesh, 27, was last seen on the evening of Wednesday, Oct. 15, at the Microsoft campus in Redmond. He lives in Seattle’s Capitol Hill neighborhood.

The Island County Sherriff’s Department and Seattle Police Department are involved in the case. Local authorities are expected to join in the search along with friends and co-workers of Venkatesh.

There was no sign of anything unusual in the car, said Akriti Dokania, a friend and co-worker of Venkatesh, speaking via phone this morning from Deception Pass, where friends were preparing to start the search after daybreak. They have been trying to get data from his smartphone from T-Mobile, to help with the search, but haven’t had been able to get the information from the carrier yet.

Update: T-Mobile says in a statement: “T-Mobile was contacted by local law enforcement today and we are assisting in search efforts. Further comment would need to come from the appropriate law enforcement agency.”

Here is the poster that friends are circulating, with contact information for anyone who has information about Venkatesh’s disappearance. 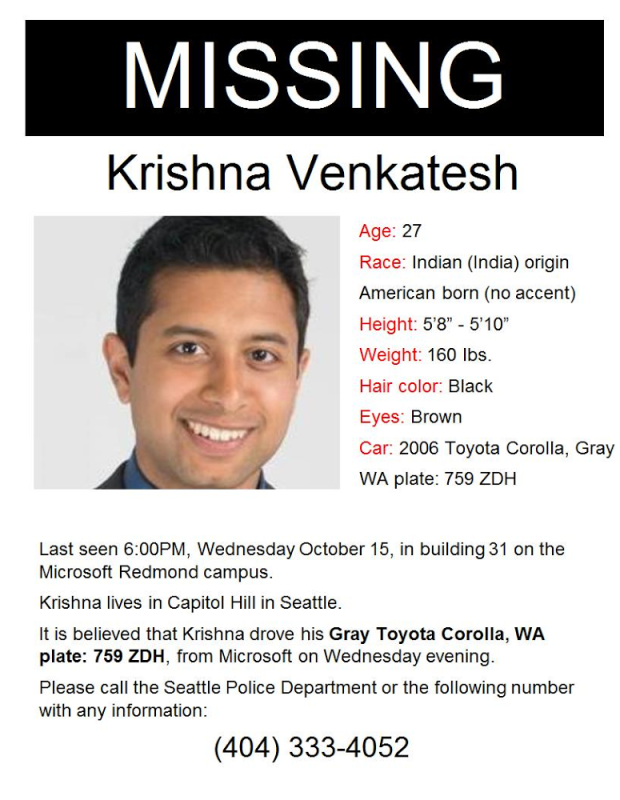