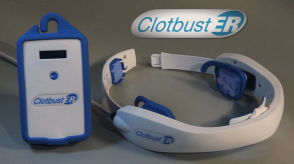 Cerevast Therapeutics, a 5-year-old Redmond company that’s developing a novel approach for treating stroke patients with ultrasound, has raised $10 million in fresh funding, according to a filing with the SEC.

Led by Bradford Zakes, Cerevast was formed in 2009 after the company purchased the assets of ImaRx Therapeutics. Zakes previously worked at ICOS and Glaxo.

Earlier this year, the company said that its device passed four independent safety reviews, and that it continued to move forward with clinical studies.

Here’s how the company describes the ClotBuster device, which attaches to a patient’s head.

The device is comprised of multiple ultrasound transducers. These transducers are mounted on an adjustable head frame, which allows the transducers to be fixed in place to administer therapeutic ultrasound in the principal regions in which the majority of vessel occlusions in the brain are known to occur. The transducers do not need to be aimed as the device contains external features, which self-align the transducers based on known anthropometric landmarks. Proprietary firmware controls the ultrasound parameters, which in turn allows the device to deliver therapeutic levels of ultrasound energy necessary to achieve acoustic streaming and enhanced clot lysis within the occluded vessel of the brain without the need for a trained sonographer.