Now, the Seattle Police Department — under the direction of newly-appointed chief Kathleen O’Toole — has launched a new program called SeaStat that’s attempting to use data to help wipe out “crime hotspots” across the city. The program also includes community reports of incidents.

A recent test of SeaStat led to additional patrols in the Capitol Hill neighborhood, which has seen an increase in crime in recent months.

“The department, as part of SeaStat, is drilling down into the numbers to get real-time information on murders, assaults, burglaries and other serious crimes to help identify emerging trends,” the police wrote in a blog post on Wednesday.

Seattle Police Department Chief Operating Officer Mike Wagers said they’ve “identified the trends and are working hard with our many partners to reverse them.”

Programs such as SeaStat also have been launched in New York and L.A., often referred to “Compstat” — shorthand for computer statistics. In L.A., the technology attempts to use predictive analysis to forecast where crimes may occur.

The Guardian reported on the L.A. system in June, noting that a third of its precincts are now using a commercial technology known as PredPol that notifies officers via color-coded maps where crimes are most likely to occur. The Seattle Police Department is using it as well to predict where gun violence may happen, while officers in Atlanta are using it to predict robberies. The Guardian report notes:

Predictive policing is just one tool in this new, tech-enhanced and data-fortified era of fighting and preventing crime. As the ability to collect, store and analyse data becomes cheaper and easier, law enforcement agencies all over the world are adopting techniques that harness the potential of technology to provide more and better information. But while these new tools have been welcomed by law enforcement agencies, they’re raising concerns about privacy, surveillance and how much power should be given over to computer algorithms.

SeaStat appears to combine both old-fashioned community input with new-fangled data analysis, and Seattle PD tells us via Twitter this evening that PredPol is a different system that “similarly uses data to put officers where they can be most effective.” 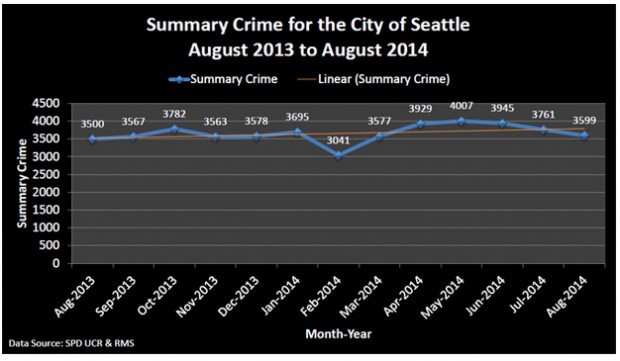 “The aim is to use the SeaStat process to quickly tackle problems as they’re detected,” the department wrote in today’s blog post. “The regular meetings are intended to help department staff assess if solutions are working, and develop other strategies if they’re not.”

Michael Wells, executive director of the Capitol Hill Chamber of Commerce, said in the post that combining community concerns with data analysis is a smart move, providing a powerful “one-two punch” that’s already resulted in arrests.

Even so, according to recent statistics, the Seattle Police Department has some serious work to do. New figures indicate that crime in Seattle is up 13 percent so far this year compared to 2013 — including a 44 percent increase in car thefts; a 14 percent increase aggravated assaults and a 21 percent in homicides (17 so far this year). Overall, there were 29,554 crimes reported during the first eight months of the year, up from 26,152 during the same period last year.