Our guests on the latest GeekWire radio show were Marcus Womack, general manager of Seattle-based Evidence.com, which provides devices and services for police departments across the country; and Hadi Partovi, a technology entrepreneur and board member of Taser International, Evidence.com’s parent company. 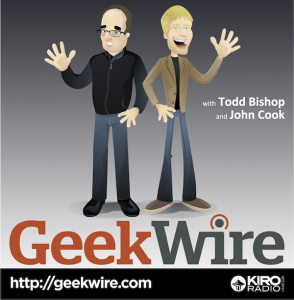 In light of the recent tragedy and controversy in Ferguson, Mo., we spent a lot of time talking about how Evidence.com uses its cloud-based system and body cameras to create transparency and accountability for interactions between police officers and citizens.

If you missed the show, or just prefer text, continue reading for edited excerpts from the conversation.

Police work is in the news lately, for better or worse, and your service at Evidence.com is helps police document evidence and use the cloud to back up what they’re doing. Can you give us a sense of what Evidence.com is about?

Marcus Womack: We are a law enforcement technology company. We create devices that officers wear in the field and then we provide the software to support it. I’d say the best example is we create cameras that officers wear out in the field to capture interactions with the community and then they actually store the captured video evidence on Evidence.com. So we build wearable devices that are used in the line of duty with officers while they’re interacting with the community.

Evidence.com is part of Taser International and you’re on Taser’s board, Hadi. How do these two entities relate to one another? Obviously they’re both used by police forces but what is the benefit to Taser of having this digital unit within it?

Hadi Partovi: The founding vision of Taser has always been to reduce unnecessary violence and to help protect life. The whole goal was to give police officers a weapon that they can use that is not a lethal weapon when they get in trouble so they can stop using their guns and use Tasers instead. And one thing Taser realizes is that no matter what police officers do, whether it’s something good or something bad, there’s this question of what actually happened. And then you get into these “he said, she said” scenarios and the benefit of having a camera on the police officer is that it eliminates the “he said, she said.” There’s clear evidence, it just makes clear, transparent accountability for everybody. 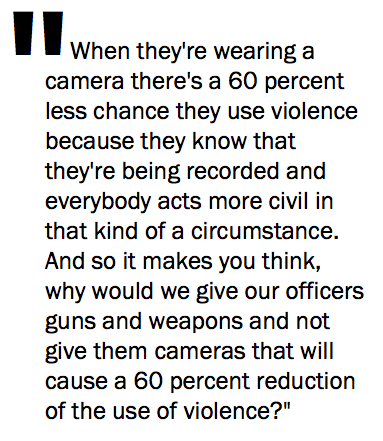 Womack: We have an example in Daytona Beach, Fla. that is an analog, or a similar situation. There was gentleman that the police were called to, an incident at a home, and the gentleman was laying on his bed holding a knife to a woman as if he was going to actually stab her. And the police were wearing body cameras, our body cameras. They came into the room and they ended up shooting the gentleman and saving the woman’s life. He actually survived but after the situation, everybody was speculating that the police came in and shot the gentleman while he was sleeping. So immediately the chief police came in and reviewed the footage and actually was able to take it to reporters or key people and actually show what happened, which helped quell some of the concerns because there was that transparency of showing exactly what happened.

Partovi: I think also on top of the transparency of what’s happening, cameras will actually increase safety. They’ve done studies where if you give the exact same officers a camera or no camera, when they’re wearing a camera there’s a 60 percent less chance they use violence because they know that they’re being recorded and everybody acts more civil in that kind of a circumstance. And so it makes you think, why would we give our officers guns and weapons and not give them cameras that will cause a 60 percent reduction of the use of violence?

How far have you gotten? How many folks out there are actually using your technology?

Womack: We have about 1,200 law enforcement agencies using our cameras today and we have, I think, over 25 with over 100 cameras. I think our largest deployment is over 600 and soon to be around 1,000 with the London Metropolitan Police.

So Hadi, people might not expect you to be in on this conversation. It might surprise folks that you’re a board member at Taser International. You had a long history with Microsoft, Code.org, and other ventures that you’ve done, some of them with your brother. What interested you in Taser International as a company to be involved with?

Partovi: The main reason I joined the board was because of the new business of putting digital cameras on police officers and storing that evidence in the cloud, and using this to bring transparency to law enforcement in a way that has now shown itself to both reduce the use of force by police officers and to reduce the complaints by citizens about them. I’m a strong believer that technology can create good social change if used in the right way. My day to day life at Code.org is around helping more students learn computer science so they can help, whether it’s getting jobs at tech companies, or more importantly changing other types of companies using technology. And at Taser this is an example of using technology to make law enforcement safer, more accountable, and more transparent.

Listen to this week’s show via the audio player below or directly via this MP3 file. The conversation with Womack and Partovi starts in the second segment of the show, at the 9:00 mark.