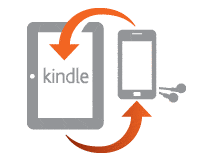 Amazon added audiobook integration to its Kindle apps for iOS and Android this morning, further tightening the connection between the Kindle platform and the company’s Audible audiobook subsidiary.

The new feature brings Amazon’s “Whispersync for Voice” feature to its primary e-book apps on third-party devices — letting users quickly switch between reading and listening to a book without leaving the app.

The “Whispersync for Voice” feature has been available in the past, and integrated tightly with Kindle Fire tablets, but previously, smartphone and third-party tablet users needed to switch to the separate Audible app to pick up listening where they had left off reading in a Kindle app or Kindle device.

Amazon offers a tool called Matchmaker that scans users’ libraries of Kindle books to see if audio narration is available. Users can then purchase an audio narration upgrade, which start at 99 cents but can range in price to more than $12, based on my experience.

Audiobook upgrades still need to be purchased on the web and can’t be purchased directly inside the Kindle app for iOS, for example.