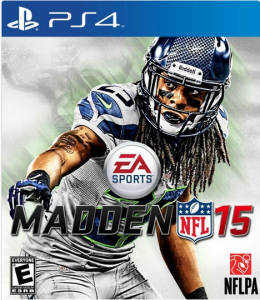 Richard Sherman has dealt with his share of doubters while working up the NFL totem pole, and even developers at EA Sports didn’t think much of the Seahawks star cornerback early on.

In an interview with Sports Illustrated, Sherman — who was just named the Madden NFL ’15 cover athlete — called EA Sports “very stupid,” for giving him a 52 overall rating during his rookie year in the league. According to Sherman, that was the worst-rated cornerback in the entire game.

Times have certainly changed since then, as the 26-year-old became the third defensive player to appear on a Madden cover on Friday. But Sherman isn’t satisfied with the honor — in fact, he’s trying to convince EA to put his “Legion of Boom” teammates on the cover with him.

Mike Florio of ProFootballTalk pitched an interesting idea for Sherman and EA: Have the three other “Legion of Boom” members — Kam Chancellor, Earl Thomas, Byron Maxwell — accept one-fourth of the compensation for being on the cover.

That’s not a bad idea, and it would be pretty epic to see all four Seahawks grace the cover of Madden. For more about Sherman’s thoughts on Madden — he’s an avid gamer — check out the Sports Illustrated interview here.

Now there’s a petition going around to get the LOB on the cover.