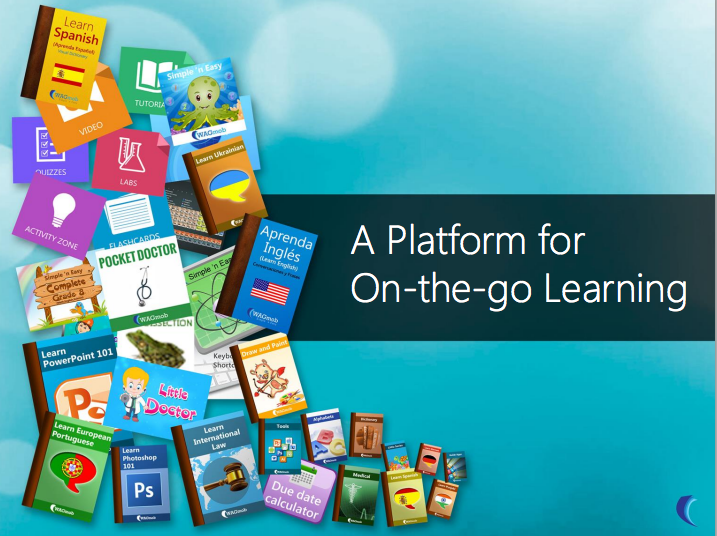 Technology is certainly changing and improving how people are educated today, and one Seattle startup is well on its way to providing apps that help us learn with our new gadgets.

Founded by Microsoft vet Kalpit Jain, WAGmob debuted in December 2010 and has grown into a successful 50-person operation. The company just announced that it now has more than one million customers from 175 countries using its visually-rich apps to learn in WAGmob’s method of “bite-sized” snacks.

WAGmob is also somewhat of a three-armed beast: It’s both a publishing platform, a B2B and a B2C company.

The startup is a perfect example of how education can be fun and interactive with new technology. The education space is a $600 billion business that’s garnered tons of investor attention. Earlier this year, Jain was part of a panel put on by entrepreneurial network TiE that discussed the future of e-learning and ed-tech.

We asked each of the panelists what they think entrepreneurs interested in this space should watch out for and here’s what Jain told us:

“Don’t wait,” he said. “Start now. Experiment rapidly. Move fast. And don’t aim for funding. Aim to solve a problem that you are passionate about. Everything else will follow your passion.”

WAGmob is certainly moving fast and has hundreds of apps that run on pretty much any device and range from science, language and business. Anyone can use these apps, from a kindergarten student all the way up to a retiree who just wants some more knowledge.

The company has raised $655,000 to date from local angels and has offices in Seattle and India.

Previously on GeekWire: Here’s why this do-it-all science instructor is the 2013 National Teacher of the Year