I’m the kind of guy who worries when something gets too popular.

I looked askance at novels (especially science fiction) that made it to mainstream bestseller lists when written by otherwise mediocre authors. I avoided buying any footwear or polo shirt that was named for, or sported images of, long-jawed fast-crawling reptiles. When anything rapidly accelerated in popularity with no clear tie to quality, I wondered how long it would take before that bandwagon crashed.

I’m starting to ponder the same about technology in education. Because, as I sat on a panel judging ten enthusiastic teams at last weekend’s nicely structured Startup Weekend Seattle EDU, I couldn’t help but think that digital learning may be getting too popular among some entrepreneurs and investors. Because said popularity may be increasingly for the wrong reasons, and have little to do with actually improving education.

There are early warning signs that the hype could be outpacing the reality, reminiscent of the mindless headlong rush to the Pets.coms of a dozen years ago: 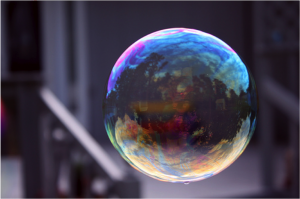 Investment. Once described as a “get rich slow” business, K-12 and other education segments are now being chased by a mob of investment capitalists. At this month’s busy EdNET education industry conference, Managing Director Susan Wolford of BMO Capital Markets said the potential for technology to customize learning for students “makes enormous sense” to investors interested in education. But she added it’s important for entrepreneurs to create “smart products” rather than jury rig something to take advantage of whatever the current funding or fads support, cautioning that too much money is chasing ideas “that should have been left to die.”

Digital instructional content company Boundless summed up the last decade of venture investment in edtech in an infographic. It concludes that “record numbers of companies are receiving venture funding,” with VC investments in education this year on pace to be five times higher than in 2002. The news site EdSurge added, “In 2011, we passed the last peak of edtech investment, which occurred during the memorable bubble of 1999.”

Attention. Not only have mainstream tech blogs like Mashable and TechCrunch upped their frequently breathless coverage, it seems almost every week a new site surfaces specializing in covering tech in schools, colleges or for consumer and adult education. More recent entrants include WiredAcademic, Technapex and Edudemic joining print-spawned old-timers like THE Journal and Education Week and more established blogs such as EdSurge, Hack Education and MindShift.

Even the Consumer Electronics Association has piled on, this month naming technology in education one of five “prominent technology trends expected to influence the consumer electronics (CE) industry in the years ahead.” The CEA report attaches digital learning to the same hand as 3D printing, next-generation TVs and displays, the evolution of audio, and mobile in Africa.

Startup activity. Startup Weekend EDU, a Startup Weekend “vertical” only a year old, is both a thoughtful driver and a reflection of edtech’s growing popularity and potential influence among entrepreneurs. Since an early EDU event was organized in Seattle a year ago, an estimated 17 EDU Weekends have occurred — and more are on tap.

It’s not the only entrepreneurial launch pad: SXSW has an education conference, SXSWedu, with a LAUNCHedu component first held in March and which will repeat next year. The Software and Information Industry Association has its long-standing Innovation Incubator at its twice-annual education conferences. And there are longer-term, investor-backed incubator projects on both coasts.

Politics. Perhaps unique to education, its adoption of technology is being promoted by those with a political agenda — or perceived to have one. Former Florida Governor Jeb Bush’s Foundation for Excellence in Education has digital learning as a core part of its “reform agenda,” and edtech frequently is mentioned in the same breath as education reform, as though one can’t occur without the other. True or not (and it’s a topic I’ll explore as moderator of a Seattle MIT Enterprise Forum on edtech in November), adding politics to the mix can mask, or make divisive, technology’s application and effectiveness in classrooms.

Individually, none of these developments is worrisome; indeed, they’re pretty cool after I and others in the field have suffered years of digital education being viewed as an ugly stepchild to sexier consumer and business tech. Even combined, these moves may be no more than a potential cautionary tale of a balance that never will tip from good to bad. After all, a lot of excitement generates a lot of activity.

So is this a case of an elitist sniffing and claiming a favorite restaurant has gotten too popular now that everyone comes to it?

No. It’s more a concern that while there is a burning unmet need and opportunity to apply technology intelligently to teaching and learning, too much overhyped edtech developed for reasons having little to do with enhancing education can collapse into a black hole of failure. And that’s a gravity well that could suck across its event horizon not just bad products, greedy investors and clueless entrepreneurs, but also the good of each group — with teachers and students dragged into the maelstrom.

Because in education technology, the stakes are much higher than another me-too e-commerce play going under. It’s how the kids of entrepreneurs and everyone else will be educated for decades to come. Not finding another place to buy cat litter.