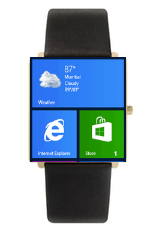 While we’ve heard rumors of Microsoft working on its own smartwatch before, a couple new reports shed light on more concrete details of the company’s plans for a wearable computing device.

Sources tell The Verge and AmongTech that Microsoft’s Surface team does indeed have some smartwatch prototypes in the works. AmongTech reported that the prototyped removable wristbands will come in a variety of colors, are made of transparent aluminum that is four times harder than glass and will feature an “adapted version” of Windows 8 with LTE connectivity.

Microsoft is no stranger to the concept of wrist-based computing, having worked with watchmakers to release a line of smartwatches starting nearly a decade ago. Ultimately, they didn’t catch on, and the watches were discontinued.

But recently several reports indicate that Microsoft is certainly looking to enter the smartwatch space again. Windows’ tile-based interface could work well for a watch as shown here in this rough mockup.

The more logical path these days might be to make the smartwatch a companion to a smartphone, receiving data wirelessly from the phone, as Apple has signaled in a patent filing. But given Windows Phone’s limited market share so far, Microsoft would be at a disadvantage to Google and Apple with that type of strategy.

Along with Google and Apple, other tech titans like Samsung and Sony are reportedly all working on a smartwatch device.

Previously on GeekWire: This geeky wristband lights up when you get a call, even in the shower