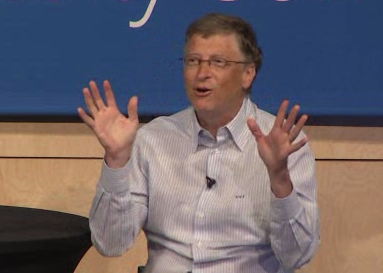 That was a snippet from the Microsoft chairman’s answer to a question about intellectual property and software development during the keynote conversation at the Microsoft Research Faculty Summit a short time ago. But before you think Gates has completely changed his tune, the broader context is much more nuanced.

The question was about the conflicts that Gates sees between commercial and open-source software in his work with the Gates Foundation, and his thoughts on the role of intellectual property in the broader world.

In reality, Gates said, there isn’t as much conflict as people might think.

“Thank God for commercial software,” he said. “It actually funds salaries, gives people jobs, terrible stuff like that. And thank God for free software. Free software lets people gets things out there that you can play around and build on. But the two work very well in a nice common ecosystem.”

On the subject of patents and intellectual property, Gates pointed to the way the system allows drug and seed companies to spread their inventions while still protecting them, enabling them to partner with groups like the Gates Foundation in projects around the world.

“It’s a complex system,” he said. “Anybody who thinks getting rid of it would make the world better off, I can tell you that’s crazy.”

The talk by Gates has spanned a wide range of topics, including robotics, education, and the future of computing.

On the subject of artificial intelligence, and the evolution of technology as a personal assistant, he joked about the ill-fated Microsoft Bob, getting laugher from the crowd as he said that type of technology “will re-emerge, perhaps with a bit more sophistication.”

“We were just ahead of our time — like most of our mistakes,” he said.