While the lovely iPhone assistant Ms. Siri may not have a favorite sport, she definitely has her preferences for certain teams.

Ask #Siri who her favorite college football team is? Just do it. #GoBeavs 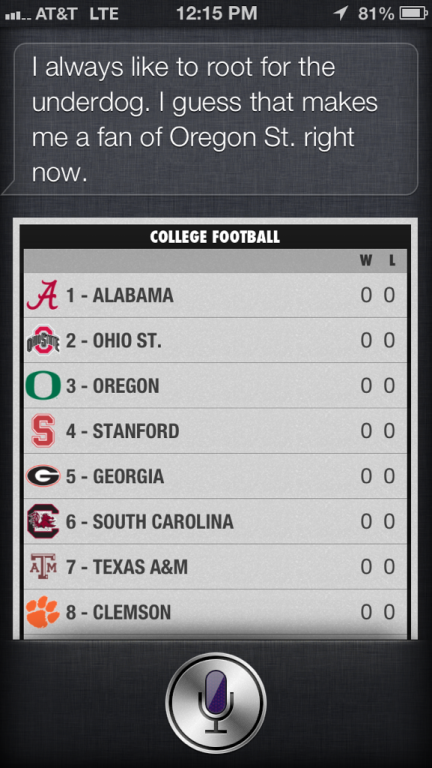 And now we know how much Siri loves underdogs. Since Oregon State is ranked No. 25 in the Top 25 rankings, the Beavs are Siri’s favorite team.

“I always like to root for the underdog,” Siri responds when you ask her what her favorite college team is. “I guess that makes me a fan of Oregon St. right now.”

Important to remember that being ranked No. 25 isn’t exactly underdog material — there are more than 120 Division I teams in college football.

It also seems as though Siri prefers to root for the underdog in all sports, which usually translates to the worst teams — the NHL’s Nashville Predators, the MLB’s Houston Astros, the WNBA’s Connecticut Sun, the MLS’s D.C. United and Oregon Ducks basketball, since the team finished last season ranked No. 25 in the rankings. But I am confused as to why she thinks the NBA’s L.A. Clippers are an underdog, given that they finished third in the Western Conference last season.

Ask her about her favorite sport, though, and she won’t say.

“I can’t say for sure,” Siri responds. “They are all fun and games.”