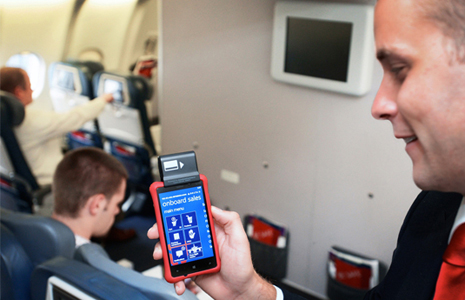 Delta Air Lines is giving a boost to Microsoft’s Windows Phone with a deal to equip its 19,000 flight attendants with Nokia Lumia 820 devices for processing in-flight payments and other uses in flight.

It’s a positive piece of news for Microsoft, given the airline industry’s embrace of Apple devices in the cockpit and elsewhere. Delta’s terminal at New York’s LaGuardia Airport is chock full of iPads.

The Lumia rollout was announced this morning by Microsoft, Delta, Nokia, AT&T and Seattle-based technology consulting firm Avanade, which developed a custom Delta experience for the devices.

The phones will operate on Wi-Fi and AT&T’s LTE network to let flight attendants process customer payments for food and seat upgrades, with the ability to email receipts to customers. The companies say the devices process transactions 10 percent faster than Delta’s previous system.

Nokia notes that the inclusion of Microsoft Office means “flight attendants can remain connected and productive during the flight.” Upcoming features will let flight attendants read customer coupons and see passenger information on their devices “to offer more personalized experiences.”

Financial terms of the arrangement weren’t disclosed, but AT&T says that Delta will be able to upgrade to the newest Nokia devices over the next three years.