Here’s some advice to keep the Seattle startup ecosystem strong: Don’t do what Detroit did.

At Zillow’s downtown headquarters today, Mayor Mike McGinn and several members of the tech community gathered to officially launch the Startup Seattle initiative, which is designed to support the growth of the Seattle tech startup community and make the city recognizable around the world as a thriving startup hub.

City councilman Richard Conlin was one of the speakers and shared an interesting statistic about Detroit. Conlin said that back in the 1950’s, the city had the highest household income per capita … in the world.

What has happened to the Motor City doesn’t need too much explaining. Conlin said one of the big reasons the city dropped off the economic map was because they got comfortable. 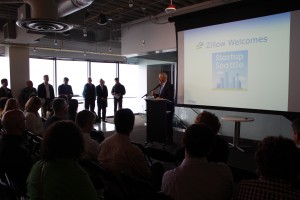 “The businesses that helped built up the economy thought everything was going to be fine and that they should keep doing the same things,” he said. “That turned out not to be true.”

He said it’s a good lesson for Seattle.

“Economies do not stand still. You can’t just set something up, think everything will be OK and keep it in cruise control,” he said. “We are doing really well because we’re trying to find ways to continue innovating and the startup initiative is really important for that.”

Previously on GeekWire: Seattle angels on what they look for in entrepreneurs, and why startups fail … Why this entrepreneur is moving to Vegas, and what it means for the Seattle scene