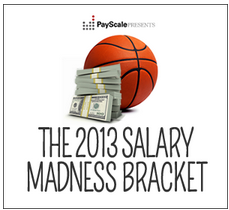 There are lots of different spins people put on the annual NCAA men’s basketball tournament — a.k.a. March Madness — from different sports to subjects. Heck, even GeekWire is doing our own Geek Madness.

PayScale took the 2013 bracket and calculated the median salary for each school’s graduates. For each matchup, the higher salary would win — just like March Madness, but based on alumni salaries instead of basketball skills.

For the second consecutive year, the Harvard Crimson narrowly won the national championship, ousting University of California-Berkeley by $2,600 in the championship game. As a 14-seed, this would be remarkable in real life, but highly, highly unlikely. But don’t count out these predictions — PayScale correctly picked Duke in 2010 as the national champ.

“Ivy League schools are not known for their sports prowess, but are known for their high earnings,” said Katie Bardaro, lead economist at PayScale. “It is no surprise that they continue to dominate the Salary Madness competition.”

Median alumni salary for the 68 schools was $68,800, slightly above the $67,500 median for 2012 and the $68,300 median for 2011. PayScale calculated the median salaries by selecting full-time alumni with 5-to-15 years of experience in their current field and took the median annual total cash compensation for the employees.

Harvard’s win marks the third-straight year of an Ivy League champion. This is the sixth year PayScale has put on Salary Madness. Here are the past winners, with links to each bracket:

Previously on GeekWire: Geek Madness: Help us pick the greatest geek of all time