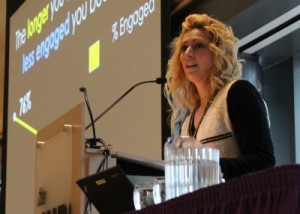 Many may think playing video games is a waste of time.

She touched on the past ten years of her work, which has been dedicated to designing alternative reality games, where players engage in collaboration to solve personal challenges.

How big can this space grow? McGonigal says enough to disrupt an industry as big and influential as pharmaceuticals.

Being able to play a game to improve your health is really big space, absolutely. Who wouldn’t rather play a game than have side affects from medicine?”

With one billion gamers worldwide now playing an average of one hour per day, McGonigal’s talk focused on how this is great news — for social work, for innovation and for “anyone who wants to help tackle some of the world’s most urgent problems,” as she put it.

She understands why some think video games are a time-suck, but has a plethora of information proving otherwise. Heck, she’s even tried convincing Stephen Colbert.

Among her data points, much of which is in her extensive research:

It’s for these reasons and others that McGonigal sees incredible potential for cities that can establish research and game industry partnerships — like Seattle.

“The game industry wants to understand what the impact games that we’re making have on people’s brains, bodies and relationships,” she said. “In cities with great research institutions, you can work with a scientist to try to really understand what we’re doing and make games that are better for players and better for society.”

McGonigal, who is currently an adviser and affiliate researcher with California-based Institute for the Future, said that game companies need to make their data available so universities can crunch the numbers in interesting ways. For example, a company like Zynga could share data about how often people are playing, the size of the social networks, etc.

The School of Social Work’s scholarship breakfasts have raised more than $380,000 in the past three years, providing need-based financial support to talented students. Bill Gates Sr. and Connie Ballmer, wife of Microsoft CEO Steve Ballmer, were in attendance Wednesday.