Today marks the beginning of the 2013 NCAA men’s basketball tournament. Hundreds of thousands around the country have meticulously filled out their 64-team brackets in hopes of perfectly predicting every game and winning a money-filled office pool in the process.

But sports fans can’t have all the fun this month, right? Here at GeekWire, we wanted to engage in a little madness ourselves.

We came up with one simple, but complex question: Who is the Greatest Geek of All Time?

We want your help to get an answer. And since it’s March, there are few better times to introduce something we like to call Geek Madness (click to enlarge): 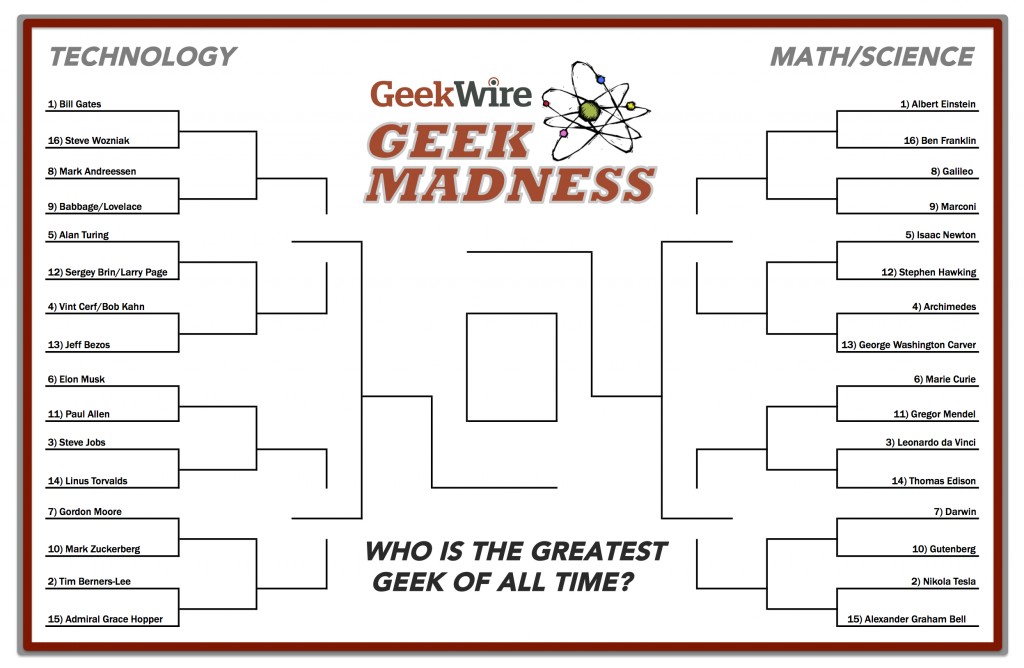 It was extremely difficult narrowing it down to just 32 geeks. There have been so many ridiculously influential people that invented and created some of the world’s most amazing products, services and ideas.

But you need to draw the line somewhere and we decided to separate the bracket into two groups: Technology and Science.

We’ll be conducting the voting process via our Facebook page. Today we’re starting with the top-half of the technology bracket:

3. Steve Jobs vs. 14. Linus Torvalds — On paper, Jobs has the advantage here. But Torvalds created Linux. That’s not too shabby.

5. Alan Turing vs. 12. Sergey Brin/Larry Page — This should be a great matchup. Many consider Turing to be the father of computer science, but Brin and Page invented Google.

7. Gordon Moore vs. 10. Mark Zuckerberg — In what should be the most hotly-contested Thursday game, it’s Intel vs. Facebook. Moore co-founded Intel and has a freakin’ law named after him. Zuck, on the other hand, might be today’s most influential geek out there.

We’ll start the voting for the second-half of the technology bracket tomorrow, then count up the votes Sunday night.

Let the Madness begin. Head over to our Facebook page now to vote for your favorite geeks.