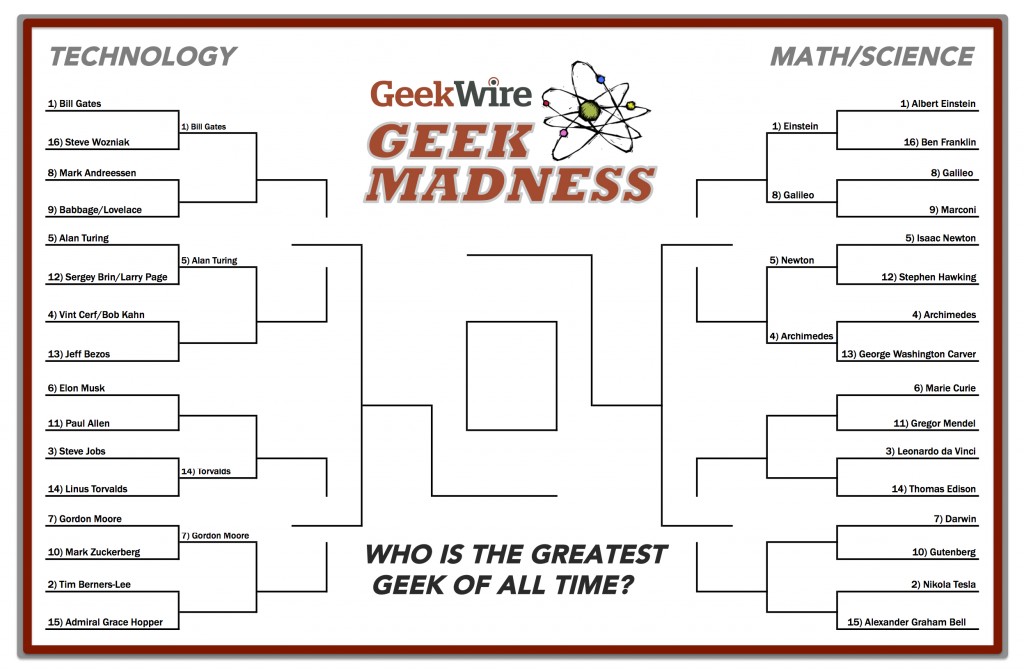 Editor’s Note: Geek Madness is our quest to find the greatest geek of all time

We’re only eight games through the first-ever Geek Madness and the competition is just starting to heat up.

The first four math/science matchups wrapped up Sunday night after some rabid discussion over on our Facebook page. Hundreds of you chimed in, whether it was The Linux Foundation pouring in support for Linus Torvalds or those who were angry with No. 1 seed Bill Gates beating Steve Wozniak.

There were no upsets this weekend in the math/science bracket, but we did see an entertaining game between Isaac Newton vs. Stephen Hawking.

This is what you expect from the No. 1 overall seed. Einstein, who we expect to advance to the Final Four, took care of business against Franklin. Still, there were several people in support of the “titanic polymath,” as one reader coined Franklin.

Though Carver was a noble agricultural chemist and known as the “Black Leonardo,” Archimedes is considered to be one of the greatest mathematicians of all time. Nuff’ said.

By far our most intense match of Day 2. Hawking had a ton of support, with several people praising Hawking for his overall geekiness. “Newton was a genius but Hawking is a true geek,” wrote Bruce. But Newton, who developed the principals of modern physics, ultimately advanced. “Newton was one of the greatest scientists who ever lived,” wrote Melih. “No one [could] develop such laws in those days.”

Galileo is known as the “Father of Modern Science,” and that certainly showed here. Even though Marconi is a Nobel Prize winner who invented the radio, he was simply demolished here.

Today we’ll kick of polling for the last four first-round matchups in the technology bracket:

Berners-Lee is the clear favorite here, as the British computer scientist is well-known for inventing the World Wide Web. But Admiral Grace Hopper, a pioneer computer programmer, should put up a fight. And for what it’s worth, she has a Cray supercomputer named after her.

Cerf and Kahn invented the TCP/IP protocol, one of the most important components of the Internet. They should have an easy time getting past Bezos, but perhaps the Amazon founder can ride his current wave of immense success and pull off the upset.

Really looking forward to this one. The 41-year-old Musk comes in with quite the resume as the founder of PayPal, Tesla Motors and SpaceX. But Allen can certainly hold his own, as the Microsoft co-founder continues to pursue several scientific, entrepreneurial and philanthropic opportunities today.

No. 8 Marc Andreessen vs. No. 9 Charles Babbage/Ada Lovelace

Tough predicting the winner of this one. Andreessen co-authored Mosaic and then created Netscape, but Babbage and Lovelace were one of the first visionaries behind scientific computing.

Just to note, we’ve put Cerf/Kahn and Babbage/Lovelace together because when examining their accomplishments, it was tough to leave one without the other.

We’ll conduct voting on our Facebook page for this round until Wednesday night. On Tuesday, the four remaining math/science first round matchups will get underway, so make sure to vote for those starting tomorrow.