Want slimmer and lighter gadgets with amazing battery life? Jeff Bezos is right there with you — and he has a potential solution. 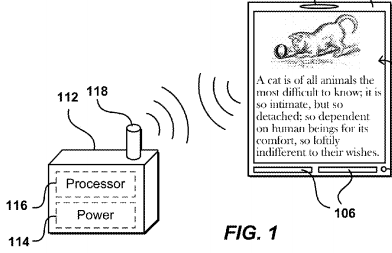 A newly published patent application, listing the Amazon CEO as one of two inventors, describes the future of “remote displays” — in which the devices in our hands are reduced to mere screens, with minimal storage and no need for bulky batteries or processors.

Power and content would be delivered wirelessly from a nearby base station, according to the filing. That base station would also receive user input (for example, detecting a gesture or receiving voice commands from across the room) and handle the behind-the-scenes processing (sending a signal to the display to turn the page, for example).

The remote displays will be able to operate “for substantially longer periods and may not need to be recharged,” the filing explains. No more pesky power cords.

How could this be applied in the real world? Here’s one scenario from the filing.

For example, a college campus might have multiple primary stations located across campus. The primary stations located throughout campus basically establish a wireless power and data network, such that a student, using their portable display, can access data anywhere on campus. At the same time, the portable display constantly receives power from the network of primary stations while the student is on campus. Thus, the portable display may operate without requiring an independent power source (e.g., rechargeable battery). Similar to Wi-Fi services today that require a fee to access, users could be charged an access or usage fee to utilize the system including usage of the wirelessly transmitted power. [A] rechargeable battery may however provide additional benefits. If the data available to the student included the electronic version of the text books required by a class, a student might be able to view the electronic version of the text book while in class and may no longer need to carry multiple, heavy books around campus.

The digital reading scenarios described in the patent application are particularly notable — potentially giving a sense for where Amazon’s Kindle business could be headed, or at least how Bezos is thinking about the future. 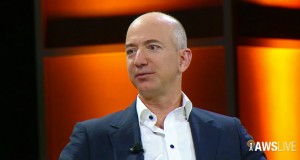 However, the situations described in the filing go much further, suggesting potential applications for these remote displays in car windshields and, yes, even glasses.

The Amazon patent filing says, “For example, a user might adhere a thin portable display to the user’s glasses, such that the user can utilize the glasses as a display screen when desired. In other embodiments, a portable display or communication device can take the form of an earpiece that allows a user to hear audio information and/or provide audio input while simultaneously receiving power wirelessly from a primary station.”

It goes unmentioned in the filing, but another benefit of this approach would be to drive down device costs and prices — a topic near and dear to the heart of Bezos and Amazon. (Of course, that base station wouldn’t be free … or would it? Future Amazon Prime benefit?)

Also listed on the patent is Amazon VP Greg Hart, who was also an inventor with Bezos on the company’s famous smartphone airbag patent. Bezos and Hart applied for the patent last September, and the application was made public last week.