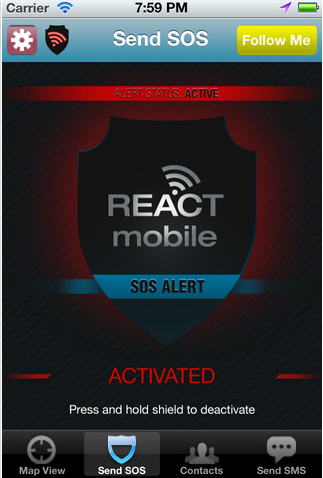 A weapon, pepper spray or even your fist may not be the best way to keep you safe in times of trouble.

It might just be an app on your smartphone.

That’s the thought behind Seattle-based React Mobile, a free app that essentially turns your smartphone into an SOS device.

“React Mobile, like a fire extinguisher, is a safety tool that you hope you never have to use, but is always good to keep on hand,” said Robb Monkman, co-founder of React Mobile. “We’ve created this app to fit multiple types of lifestyles and made the baseline model free so that it is accessible for all users.”

In an emergency, the app uses the GPS function in phones to, with a push of a button, notify pre-selected contacts (family, friends, etc.) of a person’s location. Those messages can be sent to other phones, email or social media channels. The app then prompts you to call 911.

Monkman first realized the need for a product that could be used as a silent alert when he was a victim of a hostage situation while in college. The original idea was to offer a cheaper and more efficient solution to the blue light emergency phones found on college campuses around the country. 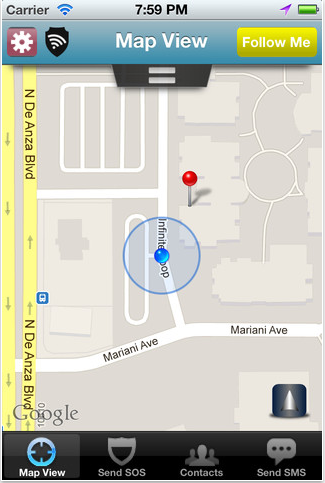 “While there is no doubt that these blue light emergency phones serve a purpose, we wanted to develop technology that puts the power of an emergency blue light phone in the palm of every students’ hand, thus, arming individuals with a more effective safety tool that can be used on and off campus,” Monkman said.

The app, which is only available for iPhone (Android and Windows coming soon), also features a premium “Follow Me” feature that allows pre-selected contacts follow you in real-time. This may be ideal for a parent who wants to make sure his or her child returns home from school safely every day. “Follow Me” is $1.99 per month or $19.99 for the year.

There are certainly competitors in this space already, from Guardly to Life360. Monkman said that React Mobile differentiates itself with its “Follow Me” function, social media features and free price.

The co-founder added that location sharing apps are expected to exceed 200 million downloads by 2017. React Mobile is hoping to target students aged 16-to-24.

“This audience, which is primarily university students, is mostly to be in the kinds of situations where they can benefit from our app such as walking on campus after a class in the dark,” he said. “This is a massive market of more than 20 million students in the U.S.”

Monkman and fellow co-founder Grant Wallace are the only employees currently at React Mobile. The company has a mix of friends, family and angel investors behind the project and are looking for additional opportunities.